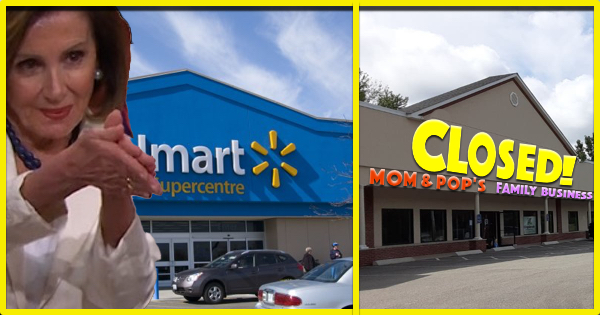 In Case You Missed It … This is how the Democrats view American small businesses .. they don’t want us around & one rep even admitted it …

“I know that you feel very strongly like many progressives about the minimum wage issue. Right now, at the same time, businesses, both large and small, are struggling in this pandemic economy, more than 9 million jobs have been lost in the last year, and they still aren’t back, and the problem is particularly acute in industries like retail and foodservice, which are more likely to pay minimum wage.”

“Abby, it’s absolutely the right time to give working Americans a raise. Let’s look at the facts. Amazon raised their wage to $15 nationally, not regionally. They have more jobs today. It didn’t hurt job creation or business. Target followed. They also did it nationally, more jobs.”

You have got to be kidding me, AMAZON?  Amazon increased jobs because you made it ILLEGAL for their competition to open.  Now THAT is FASCISM as defined by Mussolini.   Perhaps we should talk about all the other perks Congress and the USG has given Amazon.

In essence, Khanna and the Democrats promoting the minimum wage of $15 dollars an hour are murdering the American dream of owning your own business. Sure, Amazon can afford to pay $15 but look at how they can afford to do it. During the pandemic, people were not free to go out and shop, so they started ordering everything online. And when the $15 minimum wage closes all the mom and pop shops, the big boys will increase their business.

No longer will someone be able to open a small diner or a coffee shop if they are saddled with a $15 dollar minimum wage. And will the big companies continue to pay such high wages or will they turn to automation? Case in point. Two Walmart Neighborhood Markets near me closed all of their checkout lines. They installed a dozen small self-checkout stations. How many jobs will that cost nationwide?

Let’s take it a step further. McDonald’s has pot in kiosks so people can order without a counterperson. But, it goes a lot further than that, as they experiment with a machine that makes every sandwich fresh. The toppings are cut only as the machine cooks the burger, puts on the toppings, wraps, and bags your food without a single human being involved in your transaction.

Called Burgeon, the new robot promises to make fresher, more consistent burgers and could replace thousands of low-paid workers in burger bars across the world.

“The Burgeon can crank out a burger every 16 seconds. It grinds the meat, stamps out the patty, sends it along a conveyor-belt grill, toasts the buns, squirts on the condiments, slices and drops in pickles and tomatoes and lettuce, then pops the finished burger into a bag, all in under five minutes,” reports The Mercury News, which has seen the robot in action.

It’s been created by Momentum Machines, and the team behind the food-bot includes members trained in mechanical engineering, control systems, and physics at top-tier institutions in the US – Berkeley, Stanford, UCSB and the university of Utah.

The first attempt, dubbed alpha, promises to do everything human workers can do, only better. Examples given by the company include slicing toppings such as tomatoes and pickles immediately before it places the slice on to the burger.