Biden Supports Reparations: Black Slave Descendants Could Get Up To $50,000 Each?!? 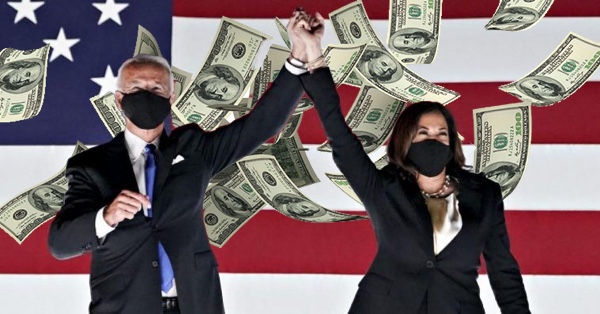 This would be the end of the US dollar.  Period, full stop.

Biden’s excuse for the payments is because of the systemic racism in the United States. But, the truth is Americans are overwhelmingly against reparations.  Which doesn’t matter because it’s not like Democrats give a crap about what Americans want.

Biden is trying to see just how much he can spend. He has proposed a $1.9 trillion dollar stimulus bill and reports say he is already planning a second stimulus for $3 trillion dollars to be spent on parts of the green new deal.

On top of that, Biden met with union bosses who are trying to convince Biden to spend $4 trillion on infrastructure. Reparations would be a killer in the world of economics.

Say all descendants of slaves were to get $50,000 and that is on the very low side. There are 48,221,139 Blacks in the country. Multiply that by 50,000 and you get $2.411 trillion dollars. That would bring total spending of all combined to over $11 trillion dollars. One study put the cost of reparations at an estimated price tag between $5.9 trillion and $14.2 trillion.

Would anyone seriously consider this? Yes, of course, the Democrats would. They’d love to buy votes in future elections with the taxpayers footing the bill.

There is currently a study being done on reparations. The bill, “Commission to Study and Develop Reparation Proposals for African Americans Act,” states:

To address the fundamental injustice, cruelty, brutality, and inhumanity of slavery in the United States and the 13 American colonies between 1619 and 1865 and to establish a commission to study and consider a national apology and proposal for reparations for the institution of slavery, its subsequent de jure and de facto racial and economic discrimination against African Americans, and the impact of these forces on living African Americans, to make recommendations to the Congress on appropriate remedies, and for other purposes.

“White nationalism and police-community conflict are just part of the long legacy of anti-Black racism that has shaped our nation’s laws, institutions, and societal attitudes,” House Judiciary Committee Chairman Jerrold Nadler (D-N.Y.) said in his opening remarks at the hearing. “That racism and division hold back our country’s long-standing efforts to carry out what the Preamble to our Constitution says it is designed to do — to form ‘a more perfect union.’”

“Reparations in the context of H.R. 40 are ultimately about respect and reconciliation—and the hope that one day, all Americans can walk together toward a more just future,” Nadler stated.