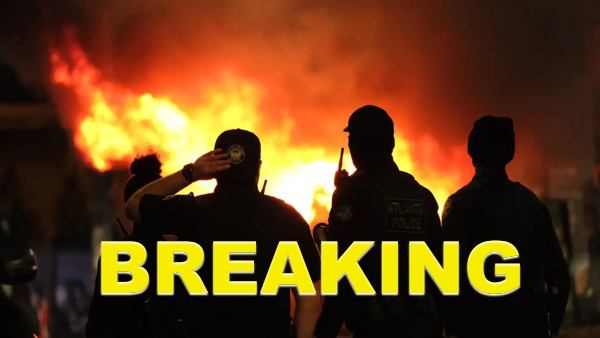 The 23-year-old Teran was shot multiple times after allegedly brandishing a gun at officers who were responding to a report of a man with a gun.

The shooting sparked outrage among many in the community who believe that the police used excessive force. The crowd quickly grew violent, with some throwing rocks and bottles at police officers.

Several businesses were looted and set on fire. The situation is still unfolding, but it’s clear that tensions are high in Atlanta  Here is what we know so far …

Rioters in Atlanta set off fireworks and threw rocks at the Atlanta Police Foundation Saturday evening, according FOX 5 Atlanta.

The incident comes after an activist, Manuel Esteban Paez Teran, 26, was killed by police after allegedly refusing demands by authorities on Wednesday and allegedly fired a gun at state troopers at the Atlanta Public Safety Training Center.

“An individual, without warning, shot a Georgia State Patrol trooper,” Georgia Bureau of Investigations Michael Register told reporters earlier this week. “Other law enforcement personnel returned fire in self-defense and evacuated the trooper to a safe area. The individual who fired upon law enforcement and shot the trooper was killed in the exchange of gunfire.”

Teran was an activist working against the development of the City of Atlanta’s Public Safety Training Center, and his fellow activists vowed to protest against the facility and police after his death.

The protest began peacefully on Saturday before spiraling into chaos, according to FOX 5.

“While the state continues to respect peaceful protest, acts of violence against person or property will not be tolerated. Those committing such unlawful acts will be arrested and prosecuted fully,” Gov. Brian Kemp said Saturday.

“Atlanta Police officers have responded to a group damaging property at several locations along Peachtree [Street],” the Atlanta PD said in a statement Saturday, according to Fox 5. Several arrests have been made at this time and order has been restored to the downtown space. This is still an active and ongoing investigation and we will not be able to provide specifics on arrests numbers or property damaged, at this time.”

Activists had been camped out on an 85-acre planned facility known as “Cop City” in recent days to protest the planned training center. When Teran was shot and killed after authorities tried to remove the protesters from the plot of land on Wednesday, they vowed to continue their protests.