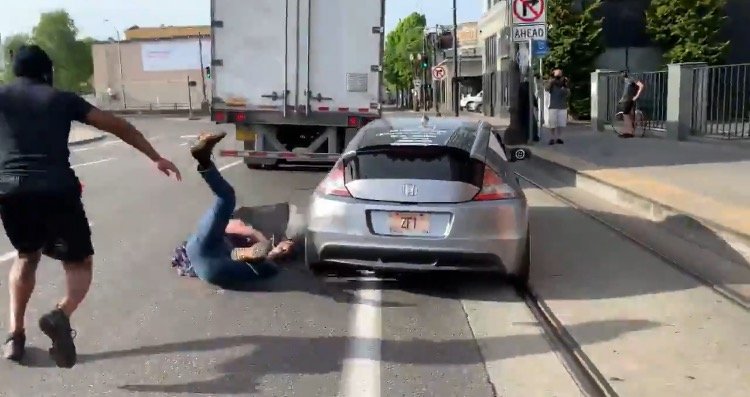 Just when you thought the entitlement shown by children and those on the left … but I repeat myself, was at an unsustainable level … enter the road setting down ‘protest.’

These people really believe that they have a right to stop traffic, jump up and down on your car, smash your windows and pull you out of your car in order to beat you to death for being … not a Marxists.  Imagine what their parents must have done to have them turn out like this … serial killers have better behave progeny.

Just in case you were having a bad day, this should cheer you up …

‘One Portland driver this week decided he wasn’t going to get yanked out of his car and beaten by left-wing protesters so he drove away as fast as he could as one lunatic jumped onto his vehicle.

A group of 25 left-wing Antifa protesters blocked an intersection in Portland on Thursday demanding the abolition of police.

The left-wing terrorists were directing traffic and forcing cars to drive around the demonstration.

A leftist jumped on the hood of a man’s car while other protesters reached into the window and punched the driver.

The driver wisely decided not to stop as the protester grabbed onto the hood of the car.

Within a few seconds the lefty went flying (his umbrella shield didn’t protect him).

Of course the left-wing protesters whined that the driver didn’t stop and bow down to their demands.’

A car just drove thru a crowd of protesters, dragging one on his hood, during a peaceful demonstration in SE #Portland.

The group of approx. 25 temporarily occupied an intersection in an act of civil disobedience in a demand for the abolition of police. #pdx #portlandprotests pic.twitter.com/NI46lhyBSH