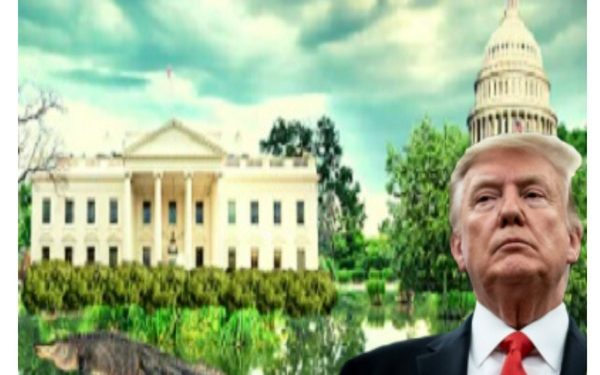 I don’t think the FBI taking privileged documents was an accident. They did the same thing to Project Veritas. The FBI is now a weaponized rogue law enforcement agency used by the Democrats to go after their political enemies. It needs to be scrapped and replaced with something else.

The Department of Justice (DOJ) denied a request from the former president’s attorneys to appoint a special master to review the records, a source told Fox News. That is an unusual way to respond to privileged documents being seized during an unnecessary raid.

“Sources familiar with the investigation told Fox News Saturday that the former president’s team was informed that boxes labeled A-14, A-26, A-43, A-13, A-33, and a set of documents—all seen on the final page of the FBI’s property receipt —contained information covered by attorney-client privilege.

The FBI seized classified records from Trump’s Palm Beach home during its unprecedented Monday morning raid, including some marked as top secret. But the former president is disputing the classification, saying the records have been declassified.”

“Sources told Fox News that some records could be covered by executive privilege, which gives the president of the United States and other officials within the executive branch the authority to withhold certain sensitive forms of advice and consultation between the president and senior advisors,” Fox News said.

Folks, what they did seems like a fishing expedition. We have the DC US Attorney who is all in working on a January 6 case, and I believe they used the premise of the boxes of documents at Trump’s home, that the FBI had full access to only two months ago, to look for any dirt they could find to nail something on Trump. It is the DOJ picking a person and then searching for a crime. That is not American due process. That is the Democratic Party way. The search warrant gave vague and broad leeway for the agents to search. They said they were looking for the documents, but now we know they were looking for anything they could find related to the documents in question or not.

On Sunday, former President Trump took to social media to respond to this news on his Truth Social account.

“Oh great! It has just been learned that the FBI, in its now famous raid of Mar-a-Lago, took boxes of privileged ‘attorney-client’ material, and also ‘executive’ privileged material, which they knowingly should not have taken. By copy of this TRUTH, I respectfully request that these documents be immediately returned to the location from which they were taken. Thank you!” 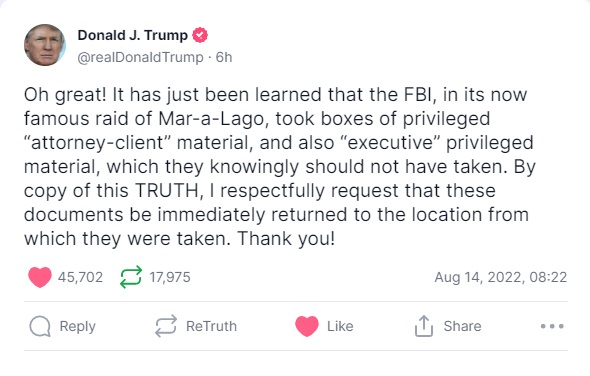 Magistrate Judge Bruce Reinhart, the Obama donor who signed off on the warrant, on Friday unsealed the warrant after a request from both the Department of Justice and the former president.

“The locations to be searched include the ‘45 Office,’ all storage rooms, and all other rooms or areas within the premises used or available to be used by FPOTUS and his staff and in which boxes or documents could be stored, including all structures or buildings on the estate,” it said.

The warrant approved the FBI to have the authority to take “all physical documents and records constituting evidence, contraband, fruits of crime, or other items illegally possessed,” in violation of US Code. But once again, there is no crime.

The warrant could have included anything at all since Trump’s inauguration.

It was reported that agents took 11 sets of documents marked classified, with some labeled top secret.

On Friday, the former president posted on Truth Social that all documents seized by the FBI were already declassified.

“Number one, it was all declassified. Number two, they didn’t need to ‘seize’ anything. They could have had it anytime they wanted without playing politics and breaking into Mar-a-Lago. It was in secured storage, with an additional lock put on as per their request,” the Trump posted.

“They could have had it anytime they wanted—and that includes LONG ago. ALL THEY HAD TO DO WAS ASK.” he added.

The Wall St Journal reported, “Mr. Trump’s lawyers argue that the former president used his authority to declassify the material before he left office. While a president has the power to declassify documents, there are federal regulations that lay out a process for doing so.”

Every time the Democrats pull a Russian collusion, a Ukraine phonecall, a January 6, or a Mar-a-Lago, it’s ELECTION INTERFERENCE, plain and simple.