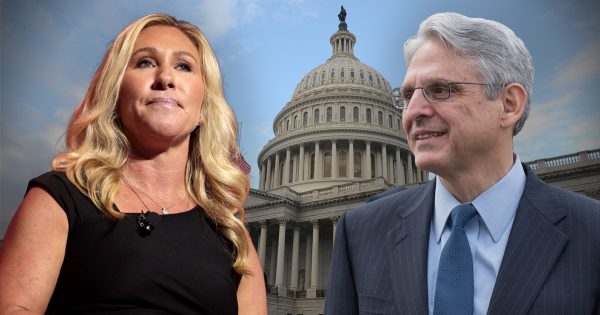 Greene filed the articles of impeachment against Garland on Friday, following theAttorney General’s announcement that he had personally signed off on the FBI raidof former President Trump’s Mar-A-Lago home.

Garland had claimed that the Department of Justice does not take the decision to approve a search of residences lightly. “Where possible, it is standard practice to seek less intrusive means as an alternative to a search, and to narrowly scope any search that is undertaken,” he said.

However, Trump, along with many other conservatives, disagreed, with the 45th President highlighting that he and his team were “cooperating fully” with the Justice Department before the raid.

As such, the articles of impeachment against Garland filed by Greene accuse him of “endangering, compromising, and undermining the justice system of the United States by facilitating the persecution” of Trump, Joe Biden’s political rival.

“Attorney General Garland’s personal approval to seek a search warrant for the raid on the home [of Trump] constitutes a blatant attempt to persecute a political opponent,” the articles of impeachment note.

The articles further argue that Garland has “overseen a denigration of the principles of our democratic republic by politicizing the Department of Justice, and utilizing the Federal Bureau of Investigation as a Federal police force to punish or intimidate anyone who questions or opposes the current regime.”

“Attorney General Garland, in persecuting [Trump] over documents he legally declassified, has engaged in a pattern of conduct that is incompatible with his duties as a civil office of the United States,” the impeachment articles continue.

“In his failure to uphold the oath he took, has, by his actions, lost the trust of citizens of the United States to faithfully execute the laws of the United States without partisan bias,” they add, arguing that Garland’s actions “run counter to the steps that employees of the executive branch must take to avoid ‘an appearance of loss of impartiality.’”

Concluding, Greene’s filed articles claim that Garland “will remain a threat to the justice system… if allowed to remain in office, and has acted in a manner grossly incompatible with democracy, self-governance, and the rule of law.”

The Georgia Representative told reporters outside the Capitol that the FBI raid at Mar-A-Lago amounted to straight up “political persecution,” and that the entire point of it was to prevent Trump from ever being able to hold office again.

“We can’t tolerate this in America where our great institutions are wielded and used in such a way to defeat people’s political enemies,” Greene said. “That’s not what this is for, and it should never exist.”

I just filed articles of impeachment against Merrick Garland. pic.twitter.com/WbNDWjItr3

In a post to social media on Thursday, Greene demanded the defunding of the FBI, the dismantlement of the Justice Department, and to “gut the agencies of political biases and persecutions,” as the American government has become an institution that protects and serves the elites, while the people suffer under the America last ruling class.”

Our government has become an institution that protects and serves the elites, while the people suffer under the America last ruling class.

We must defund the FBI, dismantle the DOJ, and gut the agencies of political biases and persecutions.

I believe in the people. https://t.co/OARsSuD7Ef