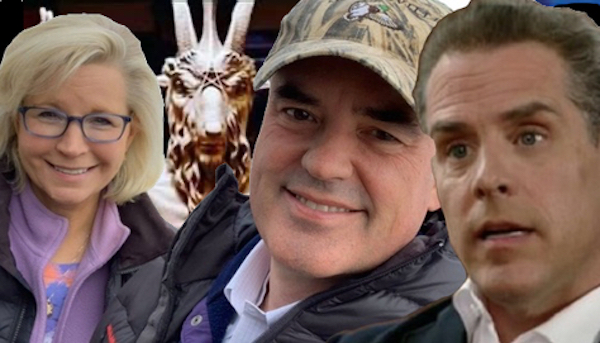 Rich Welsh| Representative Liz Cheney‘s (RINO-WY) husband is Philip Perry. Perry is a partner at the law firm Latham & Watkins that represents Hunter Biden, President Joe Biden‘s junkie son, who was the front man for the Biden crime family in overseas deals with Ukraine, China, Kazakhstan, Moscow, and others. Are you paying attention, America?

It makes sense now, doesn’t it? We really do live in a banana republic where there is an incestuous nature among government establishment types.

This means that Liz Cheney’s husband is making money off of Hunter Biden, and it’s probably dirty money.

A recent poll shows Cheney’s GOP opponent in the Wyoming primary race Harriet Hage up by 57 points. And Cheney can’t even rely on the Democrat election machine to steal some votes for her.

When the New York Times comes out against a politician who has gone down and dirty to harm Donald Trump, you know you’re in trouble. The Times put out a profile of the primary election that is only 5 days away as of this writing, reminding everyone of the RINO traitor’s failing campaign.

“She no longer provides advance notice about her Wyoming travel and, not welcome at most county and state Republican events, has turned her campaign into a series of invite-only House parties,” the New York Times reported.

The Wyoming Republican Party censured Cheney over her joining with the radical Democrats and voting to impeach President Trump who did nothing wrong.

“What’s more puzzling than her schedule is why Ms. Cheney, who has raised over $13 million, has not poured more money into the race, especially early on when she had an opportunity to define Ms. Hageman,” the Times added. “Ms. Cheney had spent roughly half her war chest as of the start of July, spurring speculation that she was saving money for future efforts against Mr. Trump.”

The delusional Wyoming representative who is about to lose her primary race in a state with less than 582,00 people has been working to create a platform for a presidential run in 2024. I personally believe she’s doing it just so that she can attack Trump during a debate. That’s how low this woman has become.

“If I have to choose between maintaining a seat in the House of Representatives or protecting the constitutional republic and ensuring the American people know the truth about Donald Trump, I’m going to choose the Constitution and the truth every single day,” Cheney told CNN in July.

Yet she has violated the Constitution every day she has sat on the unconstitutional January 6 Committee. She has fabricated data, has not allowed cross-examination of witnesses, not allowed witnessed to be called that will debunk many of the claims made by the members of the committee, has hidden exculpatory evidence, and has cherry picked information to create false narratives. There is no due process at all coming from the committee, yet they are running it like a criminal trial.

Cheney pledged to stay on her anti-Trump witch hunt, the thing she obsessed over that will end her political career. Not only is she going to attack Trump, but “Trumpism,” which is the America First agenda. Yeah, good luck wirh that, Lizzie.

“Asked if the ranks of off-limits candidates included Governor Ron DeSantis of Florida, whom many Republicans have latched onto as a Trump alternative, she said she ‘would find it very difficult’ to support Mr. DeSantis in a general election,” the Times wrote.

Cheney was a war hawk like her father, Dick Cheney, who served as vice president in the George W Bush administration. Trump was against “never-ending wars” that cost us blood and treasure. The RINO war hawks get their rocks off by bombing foreign countries and they get mega campaign donations from businesses that make billions by manufacturing things used in war.

“I think that Ron DeSantis has lined himself up almost entirely with Donald Trump, and I think that’s very dangerous,” Cheney told the paper.

Well, millions of Americans think Cheney lining herself up with the lawless, radical Democratic Party is very dangerous and she doesn’t have a snowball’s chance in Hell of winning the White House.