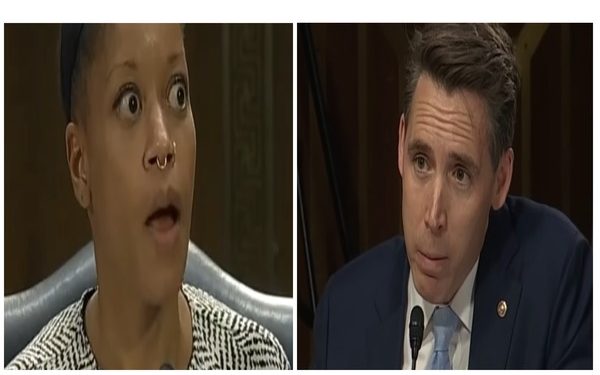 When the senator responded to the crazy woman’s accusation that he was denying transgenders exist, she asked him if he believes men can get pregnant. When he said no he doesn’t, the woke priestess said his response was confirming that he denies transgenders exist.

During the Fox appearance, Hawley compared the Democrats’ zealotry in blurring what gender is to a religion.

“I think it’s a fact, Sean, and you know what, but for today’s Democrat elite and Democrat leaders, it’s not only a fact, it is religion to them that you affirm that men can get pregnant and if you don’t say it, then you are responsible for violence,” he said. “I mean, this is their line.”

It’s true. We saw this lunacy coming a few years back when Steven Crowder did a Change My Mind segment and a college student said that if you don’t call her by her personal pronouns; it was akin to assault and/or sexual harassment.

“By the way, Sean, these are the same people, the same Democrat leaders who want to force young women to compete against biological men in girls’ sports,” Hawley explained. “I mean that now we know why. If for all the parents out there, like why in the world do all of these Democrats want to eliminate girls’ sports? Now, you know why. They don’t believe there is any such thing as a woman, not really, and they think that if a biological man wants to claim to be a woman, hey, that’s fine, and we all have to accept it, or else we’re bigoted and violent. It’s just crazy.”

I believe what a certain portion of our society has evolved into has materialized by a series of things that have been going on for years. I think the Marxist influence in left-wing society along with the dumbing down of our educational system and our culture so as to avoid criticism from what I refer to as “The Outrage Mob” or TOM, people who are not satisfied unless they get the feeling of virtue when complaining about anything they don’t like.

Everyone in TOM wants to be heard and treated as if they are a respected authority of their own insanity.

I believe that liberalism in families created a bunch of children who were never challenged by norms and traditions by their liberal parents while growing up. I think that too many liberal parents felt that they needed to allow their children the freedom to express themselves and make their own choices in life rather than go through the struggles of teaching their children right from wrong and giving them principles in which to live by.

Most of us in the sane world grew up going through a battle against their parents in a rebellion phase. Everyone needs that rebellion phase because you have to get it out of your system and you finally come around to learn that the world doesn’t work in the way that you thought it did and that your parents were mostly right about everything.

After growing up in liberal la la land, they then move out of a liberal house and into a liberal college where the professors also allow them to express themselves and make their own choices in how they are to be educated.

These people have never met resistance coming from normal society. They have never learned that the world does not revolve around them. And so these are the people who will go into real life as adults and complain and protest against anything that seems like any form of adult authority. They believe that they have the authority to tell other people the way things should be, because no one ever corrected them or knocked them in line their entire lives. We now have a nation of members of The Outrage Mob. It’s a collective mental illness brought to us by a hundred years of liberalism.

By the end of their transformation into TOM, these people somehow manage to get through law school, become educators, get elected to office and become CEOs of corporations. They are found in all walks of life and our society winds up with people in powerful positions who subscribe to the same ideology that says if a man puts on a dress and identifies as a female, then he is, in fact, a female.

Hawley made the point that the gender movement is an agenda driven by a small minority of the population.

“I just don’t think that you’re going to find many parents in this country — I mean, I say this as a parent of three kids, three little kids,” he said. “I don’t have any parents who say, yeah, I want my — my young girl, I want her to have to play against biological males. I want them to be in her locker room. I want them to be in her safe spaces. I thought the left is all about safe spaces, but not for women, not anymore, not for young women.”

Part of it is the drive to sow chaos in society because Marxists thrive on chaos. Marxists take advantage of chaos by using that time of instability to push their agendas. It doesn’t even have to be a solution to the rising chaos.

“It’s a crazy agenda, Sean,” Hawley said. “Like nobody supports this agenda. I mean, what 2% of the population maybe? It’s craziness. And to hear Democrats say this stuff and insist that we all affirm it — it’s not just that it’s their opinion. I mean, sure, you can have whatever opinion you want, but to insist that we have to agree that women should play men’s sports, we have to agree that men can get pregnant, or else we are predators, I mean, that’s just insane. It is truly insane.”

Theodore Roosevelt once said, “To educate a man in mind and not in morals is to educate a menace to society.” I think we have millions of menaces running around in our society today. And they believe that we are the crazy ones.

Many leftist outlets are bragging that Professor Bridges “schooled” Hawley on reproductive justice, a Marxist term for gender identity politics. I don’t think she “schooled” him at all. I believe he exposed her for being a lunatic who probably never met any resistance from a normal adult her entire life.

Bridges wrote a book called, “Critical Race Theory: A Primer” which was published in 2018. She is a professor of law and a professor of anthropology.