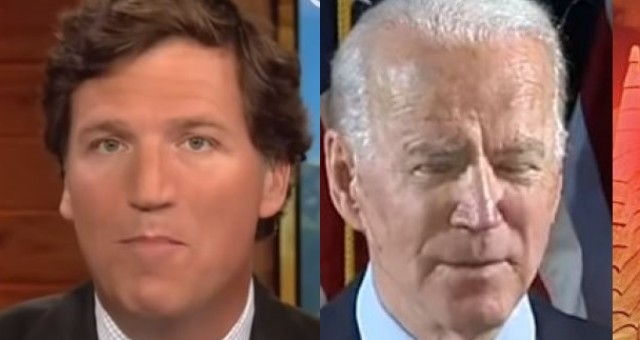 ICYMI| Okay, so who is actually calling the shots at the White House?

But Fox News host Tucker Carlson has a different opinion.

He thinks that Kamala Harris s running the show.

During his commentary, Carlson suggested that, instead, Vice President Kamala Harris was actually making most of the decisions, though she wasn’t elected to do so and despite the fact that during the 2020 Democratic presidential primaries, she was among the first candidates forced to drop out of the race.

“In one of her first official acts as vice president, back in February, Kamala Harris decided to declare what she called a ‘national emergency,’” Carlson began.

The emergency, Harris said, was an exodus of women from the workforce, which Carlson then likened to news reports last week that several of Harris’ female staffers have either left or are unhappy working for her.

He went to rap Harris over her job performance overall, including the border crisis which Biden placed her in charge of in March, but which is still far from being under control as she focuses on the “root causes” of mass migration.

“They tell us Kamala Harris is very impressive but look at her. She’s a joke. She can barely get through the day. She has no idea what she’s doing,” Carlson ripped.

“But you can’t say that out loud. Shut up and accept Kamala’s dominion over you. That’s the new rule. Point out that she’s a power-hungry buffoon posing as a competent adult, and they will instantly denounce you as a racist. They do this because it works. A lot of people, particularly in the news media, still find the idea of being called a racist the scariest thing they can imagine. Scarier than dying. So they will do anything to avoid it, including ignoring Kamala Harris’ obvious mediocrity. So they barely cover her,” he added.

Later, Carlson cited new polling from The Trafalgar Group, which he pointed out was one of the very few firms that got the 2020 election results right.

“We have an exclusive new poll from The Trafalgar Group and Convention of States that shows who Americans believe is running the federal government. In a survey of likely voters, the majority of American voters said Joe Biden is not really in charge,” he said.

“And it wasn’t just Republicans who thought that. A third of Democrats said Biden was really in charge. Another 10% weren’t sure. It’s hard to believe there have ever been numbers like that in American history about the president,” said the host.

“What do they tell us? They tell us is that media storyline — Joe Biden’s fine; he’s just got a really bad stutter, so relax — isn’t actually convincing anyone. But not for lack of trying,” added Carlson.

“Increasingly, it seems like Kamala Harris is running things. If you believe in democracy, this is a problem,” the host continued.

“No large group of people has ever wanted to put Harris in control of the country. At the height of the last Democratic primary season, most of her own constituents told pollsters they wanted her to drop out of the presidential race,” he said.

“Only 7% of Democrats in California thought Kamala Harris should be president of the United States. The people who know her best have the least respect for her.”

Tucker is a hell of a lot smarter than I am but my thoughts are that Kamala Harris is too stupid to be calling the shots but on the other hand when you look at what is happening in our country I suppose it’s possible that she is in charge.

All I know is that we have to reclaim our country ASAP or we will no longer have a country.