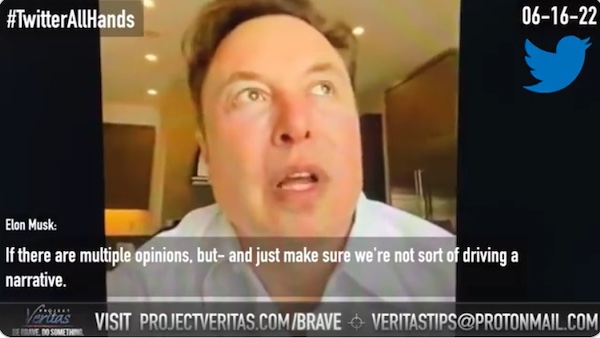 Project Veritas has released the video from Elon Musk’s talk with the Twitter employees. But, the video did not pick up the wailing and screaming from the hardcore leftists as he spoke. Musk emphasized free speech while talking to the employees, and how any speech which does not break the law must be allowed. That must have taken the air out of those censor-hungry employees. Dollars to donuts, there were employees thinking to themselves, they will not obey.

“It’s essential to have free speech and to be able to communicate freely. If there are multiple opinions, just make sure we’re not sort of, driving a narrative.”

“In order for people to have trust in Twitter, I think it’s extremely important that there would be transparency.”

"It’s essential to have free speech."

"It’s important to represent multiple opinions & not driving a narrative."

“In order for people to have trust in @Twitter there needs to be transparency." pic.twitter.com/7rNphPg2zH

Musk said that if Twitter is successful, the 10% of the far left and the 10% of the far right, both will be complaining equally. Musk says personally, he prefers moderate politics. Musk recently r5eported that he voted for Ron DeSantis in the recent primary.

"It's essential to have free speech."

"Important to represent multiple opinions & not driving a narrative."

“In order for people to have trust in @Twitter there needs to be transparency." pic.twitter.com/PSgDLTviDi

Project Veritas previously obtained footage of Twitter Lead Client Partner Alex Martinez discussing the company’s ideology. While he was at it, he began criticizing the Musk takeover of the failing business. He directly expressed his disagreement over free speech, believing speech is whatever he wants it to be. They have free speech in Iean. It’s freedom after speech that the problem comes in.

Martinez was seen saying that, “the rest of us who have been here believe in something that’s good for the planet and not to give people free speech.”

The lead client partner also discussed censorship on Twitter saying, “people don’t know how to make a rational decision if you don’t put out — correct things that are supposed to be out in the public, right?”

I’ll give you three guesses what Martinez’s future with T3witter looks like and the first two guesses don’t count.