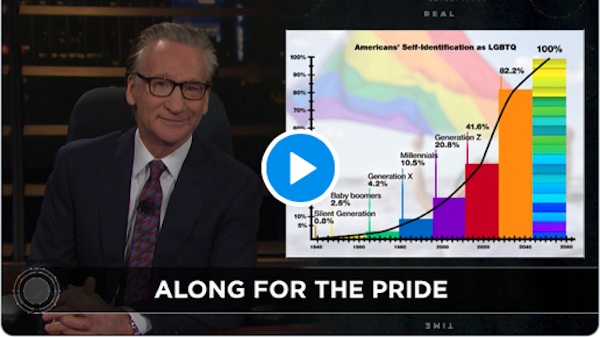 Erica Carlin| While discussing statistics surrounding the trans movement, ‘Real Time’ host Bill Maher drew a solid line between himself and the libs of today. The lifelong Democrat has grown more and more fed up with the left since Biden took office because it’s only continued to reach new extremes and fester. He began by noting the polls show the number of Americans identifying as LGBTQ has doubled with each passing generation, joking that ‘if we follow this trajectory, we will all be gay in 2054.’

Maher then asked if people are allowed to see those increases and ask: ‘What’s up with that?’

‘It wasn’t that long ago that when adults asked children what they wanted to be when they grew up, ‘They meant what profession,’ Maher said.

He then pivoted to suggest that the number of LGBTQ Americans had risen so sharply, a recent ACLU finding claimed abortion rights bans would affect LGBTQ people more than cisgender women giving birth.

‘Someone needs to say it – not everything’s about you. It’s okay to ask questions about something very new,’ Maher said.

He then turned to puberty blockers, which are given to transgender youth, which Maher called ‘literally experimenting on children’ and suggested that the long-term effects haven’t been studied enough, showing studies that said it caused lack of bone density and infertility.

Maher also cracked about the upcoming Pride parade in New York City not including gay men, but only trans people and lesbians.

‘That’s where we are now – gay men are not hip enough for a Gay Pride parade. Gay is practically cis, and cis is practically Mormon,’ he said, showing a photo of Senator Mitt Romney.

Maher then suggested the number of people identifying as LGBTQ is ‘trendy’ because teenagers like to challenge ‘the squares who brought you up’ and wondered why he saw so many transgender children in his home of California but not in Youngstown, Ohio or the rest of the country.

He said that granting children’s requests for puberty blockers and genital surgery makes them part of a culture war they shouldn’t be a part of and that they’re just being sucked in by this trendy movement.

‘Never forget children are impressionable and very, very stupid,’ Maher said. ‘A boy who thinks he’s a girl maybe is just gay – or whatever [the television character] ‘Frasier’ was

‘And maybe, if life makes you sad, there are other solutions than hand me the d**k saw,’ he added.

Maher wrapped it up by saying that while gender is fluid, ‘kids are fluid about everything’ and want to be different things when they grow up from one day to the next.

‘I wanted to be a pirate. Thank God no one scheduled me for eye removal and peg leg surgery,’ he finished.

Maher has already received some hate for this new segment but I can only imagine that it will only get worse for him. How much longer until the insane ultra-left scared all moderates over to the right? When they lose by a landslide they’ll have no one to blame but themselves because families don’t want this crap.

My last month check was for 11000 dollars… Everything I did was basic online work from comfort at home for 3-4 hours/day that I got from this office I found over the web and they paid me for it 95 bucks each hour… Attempt it yourself….AND GOOD LUCK.:)HERE====)> http://WWW.WORKBZ.COM

That’s why I say we have no hope for change except by force. This country has been taken over by corrupt politicians for over 45 years. Everyone one that in government from the past 45 years has baggage. They all need to be put on trial and investigated.i do home work …..http://www.workbz.com

I get paid more than $200 to $400 per hour for working online. I heard about this job 3 months ago and after joining this I have earned easily $30k from this without having online working skills . Simply give it a shot on the accompanying site…
Here is I started.…………>> http://Www.BizPay1.com