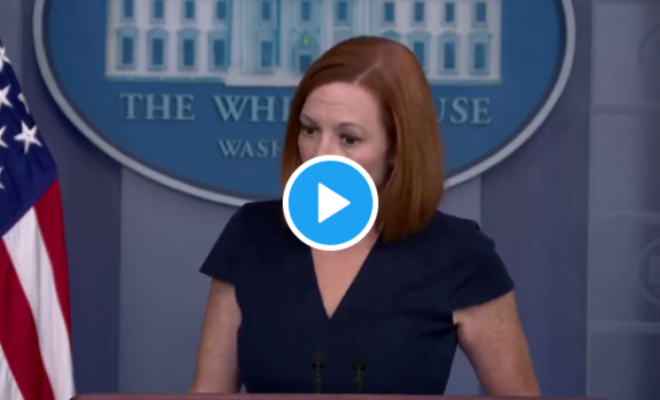 ICYMI| White House Press Secretary Jen Psaki was under fire Tuesday night taking hard questions from reporters. As you might expect, Psaki dodged answering the tough questions and at point, flat out lied to reporters.

The Taliban issued the August 31st deadline to Biden to get Americans out of Afghanistan. In a pure move of cowardice, Biden backed down and excepted the deadline even though his own officials say it will be impossible to meet. This, of course, sprung up a ton of questions from reporters.

Like the question from White House correspondent, Peter Doocy who hit Psaki with the latest discovery of a confirmed American trapped in Afghanistan. Fox News’ reported having contact with a woman currently stranded after Biden’s Afghan pull out, even though just Monday Psaki claimed there were ‘no stranded Americans’.

Psaki took a weird turn answering Doocy. She pretty much victim-blamed the trapped woman and implied that she must not be registered?

Later during the briefing, Psaki makes outlandish claims and reveals one dark secret.

Doocy: "You said yesterday it's irresponsible to say that Americans are stranded in Afghanistan right now. What do you say to the American citizens in Kabul that fox spoke to this morning" who says she's been "stranded."

During another moment, Psaki called the operation a success:

As thousands of Americans are stranded in Afghanistan, Jen Psaki says she wouldn’t describe the withdrawal as “anything but a success.” pic.twitter.com/lSxyJj8UDV

Finally, one reporter got Psaki to admit the ugly truth— The White House expects that some Americans might get left behind. Here is how their exchange went:

Reporter: Okay. Say after the withdrawal is done, it’s declared, it’s done, everyone’s out, if one U.S. citizen was suddenly discovered saying, “Hey, I really want to get out and I’m stuck,” who knows where, somewhere in Afghanistan or in Kabul, he’s got any problem, would this trigger a diplomatic, military, all hands on deck type thing to get to that person out, whatever the date?

Psaki: Our commitment continues to be to U.S. citizens. If they want to leave, we will help get them out.

Reporter: No matter of what the date?

Psaki: Again, we expect there could be some, but I’m not going to get into it further. Go ahead.

Jen Psaki refuses to say what Biden would do if Americans are left behind after all U.S. troops leave Afghanistan.

“We expect there could be some but I’m not going to get into it further” pic.twitter.com/yrxGq4tsQz

So to sum all this up;

You have to register to leave, even though reports show that many citizens have limited online access.

The White House believes this humanitarian dumpster fire is nothing short of a ‘success’.

The Biden administration fully expects that some Americans and allies will be left behind to deal with the Taliban, alone. I guess for an undetermined amount of time?

Yeah, a huge success. With triumphs like this, who needs terrorists?

Erica is a syndicated opinion columnist for the Beltway Report and Project Saoirse.