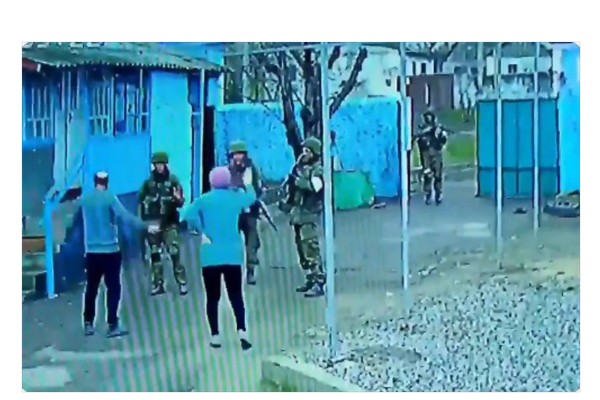 An elderly Ukrainian couple took a stand against some Russian soldiers who broke into their property, which received praises from the US Embassy for their outstanding bravery.

Video footage from a surveillance camera that captured the incident on Friday was posted and shared on social media by the US Embassy Kyiv.

In the footage, 3 armed Russian soldiers wearing combat gear walk up to the front of the elderly couple’s gated driveway and they start breaking in by forcing the gate open and proceeding forward with their weapons drawn while you hear dogs barking in the background.

“#UkrainianHeroes: Today we salute this elderly couple, who stood up to three Russian soldiers.”

#UkrainianHeroes: Today we salute this elderly couple, who stood up to three Russian soldiers. pic.twitter.com/GG7lZ8cfqx

A new video feed then starts from a different angle at the other end of the driveway on the property. An elderly man wearing a blue sweater and an elderly woman wearing a blue coat and pink hat appear at the end of the driveway and start walking toward the young Russian soldiers. The man approaches the soldiers and starts waving his fist in the air at them while they’re pointing their weapons at him.

One of the soldiers fires his weapon into the air when the argument between the elderly couple and the troops heats up. If he thought that would frighten the couple into submission, he thought wrong. The two elderly folks continued yelling at them when a fourth soldiers comes onto their property, letting the three know they should take off and leave the premises.

But that was nothing. The woman, who we can presume to be his wife, gets right in the face of the soldiers and, at one point, starts gently shoving them toward the gate with the insinuation that it’s time to go.

The soldiers realize they lost the argument and turn around to leave. The couple walks behind them, herding them outside the gate, with the elderly woman physically guiding them off their property.

What a wonderful thing to see the elderly couple take no guff from the Russian soldiers.

The incident happened about 80 miles or so east of Odessa in a place called Mykolayiv Oblast in southern Ukraine, a city that Russia has been targeting because of its strategic importance. Ukrainian authorities reported that Russia shelled civilian residential buildings and a cancer hospital on Friday.

The world is shocked by the targets being bombed by Vladimir Putin’s military. Western countries over the last 50 years or so have taken to hitting enemy targets strategically planned to do their level best to avoid civilian casualties. Putin doesn’t play by those rules. War is war and there are no targets that are off-limits for him. He just never expected his troops to run into an elderly Ukrainian couple that wasn’t going to put up with their nonsense. Good for them.

← Previous Story A Sloppy Pelosi Loses It After Republican Laughs At Her Speech
Next Story → OMG: Dinesh D’Souza DESTROYS Michelle Obama, I’ve Never Heard Such A BRUTAL Tongue Lashing In My Life!