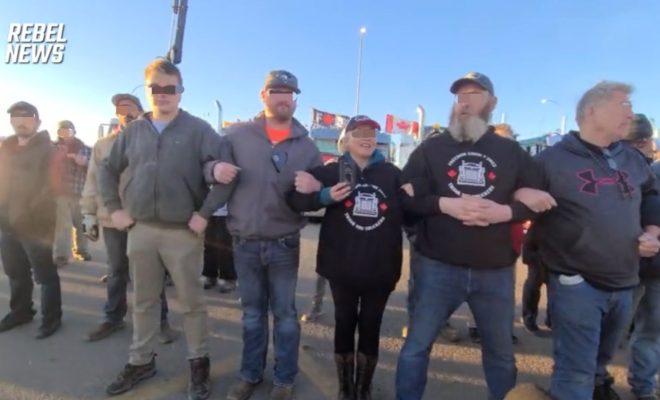 I have a feeling that these trucking protests and civil disobedience are something that we will look back on in the years to come and tell our children that THIS is when the real resistance began to come together.

For years and years there has been talk among patriots and concerned citizens trying to figure out just how we will be able to peacefully stop the slow (yet even increasing in velocity) march of tyranny on this continent.

No one knew just what shape it would take, however, most agreed that civil disobedience would be the corner stone of such an effort.

It feels as if this crucial moment is perhaps already upon us, the moment when we, the people, put our feet down and say enough it enough!  It is only right that the truckers, the men and women who, without NO ONE EATS, are the ones to lead this historic stand against tyranny.

Civil disobedience. This is the way.

Policing requires the public’s compliance – to a degree – and in Canada, enough people have risen up to say no more.

According to Rebel News, Police provided little information about what the punishment for staying would be, stating only that they would be enforcing the law on anyone who remained in the area – in other words, the RCMP was casting a vague threat of arrests.

The 1PM deadline came and passed, with absolutely nobody moving, but what happened next was truly awe-inspiring. A few hours later when a sudden barrage of officers arrived to move in on the group, the convoy participants gathered together and linked arms, forming a line around the Trucks behind them.

“HOLD THE LINE.” WE AREN’T GOING ANYWHERE, they shouted. Some even began praying as the line of cops stared them down.

After about a minute, the crowd breaks out into an acapella version of “Lean on Me” to solidify their show of unity.

“Lean on me
When you’re not strong
And I’ll be your friend
I’ll help you carry on.”

The scene is a sight to behold. These brave people are heroes.

[THE FIRST VIDEO HAS ALREADY BEEN SCRUBBED BY TWITTER … BUT DON’T WORRY, THERE ARE MORE BELOW!]

Even with the backup that consisted of tactical units and additional officers, the police were completely outmanned by the united front of protesters, making the decision to not arrest anyone a quick and easy one. All the officers could do is start handing out traffic tickets, which they gave out to every single vehicle that was parked along the highway.

While the protesters were distracted by the police line at the front, a large group of officers approached the protest from behind, marching throughout the line of vehicles in military-style formation. They recorded license plates and issued tickets as they went.

From Rebel News, which was on the scene as it all unfolded:

“The entire incident was incredibly surreal — officers in tactical gear marching rank and file down a rural highway was pure intimidation. An RCMP representative endeavored to ensure people that there would be no arrests, but their actions seem to all in attendance a show of force with the intention of scaring them away, but truckers, farmers and their supporters don’t scare easy.They stood their ground respectfully and peacefully and told the RCMP that they weren’t going anywhere.”

Shocking scenes here just outside of Milk River, AB at the RCMP blockade.

The FULL VIDEO of the event is also well worth your time.  It can be seen below:

The Gateway Pundit’s Julian Conradson continues: ‘Rebel News has set up a crowdfunding campaign to help fund the legal defense of these brave men and women. Convoy Protesters are able to submit their tickets to offset the costs of their legal fees (link to submit tickets here). If you would like to support their fight for freedom by donating to the fund, the campaign for Trucker legal defenses can be found here.’

You can read the rest of Julian Conradson‘s epic article HERE.

Please join us in praying for the brave men and women who are risking not only their livelihoods, but their very lives to fight for our freedom.

Also, if you are able, please take a moment to donate to the crowdfunding campaign listed above which was set up by Rebel News for the brave men and women on the front lines.  You can do so HERE.

← Previous Story Just In: 28% of Mail-In Ballots Rejected!
Next Story → AMERICA HAS FALLEN: “Secret Police Force that Acts on Behalf of The Democratic Party” Just Got Exposed [VIDEO]