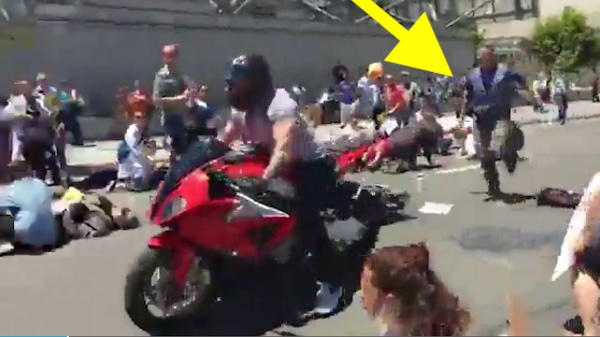 Do you remember when this happened a while back?  Of all the ways to deal with ‘protesters’ blocking the roads in American cities … this is one of the most … ‘creative’ that I have seen to date …

A group of anti-Trump agitators decided to lie in the street to protest the GOP’s new healthcare bill, and they were in for quite a shock after a biker spotted them and decided to make a point.

Video of the incident shows the petulant whiners lying outside of the San Francisco Federal Building when a man on a red sport bike decides to pay them a little visit.

Although none of the demonstrators were injured, many of them were dismayed that someone actually wanted to use the road they were blocking for no good reason at all.’

From the Daily Mail:

A spokeswoman for Bay Resistance, Emily Lee, said the driver was ‘definitely targeting us’, according to CBS.

She added: ‘Everyone thought he was just confused, but he didn’t stop, and at some point it became clear he was going to come through the crowd and people jumped out of the way.’

Lee added that the man then turned around and began driving back into the activists before a police officer drew his gun and ordered him to stop.

The man on the bike ended up being arrested, although he still has yet to be charged with a crime. nobody was injured either, but as we all know with the left, they’ll use any excuse to pull the victim card, and that seems to be exactly what they did here.’

Come November, when the Democrats lose both Houses of Congress, it’s going to be pretty darn evident the American people don’t want what they’re selling.

We welcome everyone’s right to protest, 100%.  I don’t care if the protesters are open communists, they deserve the right to be heard.

I can’t say what the biker did was ‘right’ …. but it sure made me LMAO!