Gaetz To Nominate Donald Trump For Speaker Of The House! 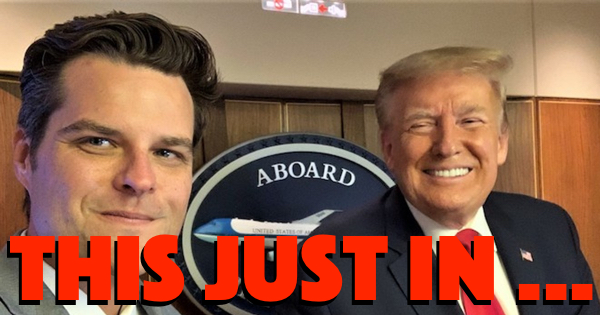 The political opponents of President Donald J. Trump and his supporters have been on overdrive for 5 years, mocking all of the hopes and all of the concerns of the Americans who joined the “Make American Great Again” crowd.

Anything that raised up a patriotic spirit for MAGA has viciously become the fodder of nighttime comedy and social media influencers. Those days may be over because this news is going to make those anti-American talking heads very, very sour.

Key Point: This idea has legs. It has the hope of a great comeback and America loves a comeback.

“I am very eager for Donald Trump’s return to Washington DC and I am an impatient man,” US Rep. Matt Gaetz from Florida said in an interview on Real Americas Voice (RAV) news network, on Wednesday. “I will nominate Donald Trump for Speaker of the House when we re-take it in 2022.”

Gaetz, the author of a new book titled Firebrand, has officially made an announcement that is going to freak people out. On RAV recently, Dr. Gina Loudon interviewed Gaetz.

Gaetz explained the process by which he would nominate Trump, saying that Trump has been working hard to influence the Primary candidates more so now for 2022, than he did in 2016.  Considering the support that candidates get from voters when Trump endorses candidates, the influence is powerful.

.@RepMattGaetz pledges that when Republicans retake the House in 2022, he will nominate President Donald Trump for Speaker of the House.

Loudon mentioned that the GOP, who wants to hold on to their power may not be supportive of such an idea.

Talking about American First candidates, she said that the party is unwise to discredit Trump because whatever he touches turns to “political gold”.

The idea that Trump could be nominated and elected as Speaker of the House in 2022 has been ongoing since the election of 2020, with many American voters wanting to see a return of his America First policies after an onslaught of Globalist initiatives which have destroyed their trust in all forms of Government.

Polling shows that Americans have a general distrust for politics and media.

Gatez is holding out hope that he has found a solution to unify the country- which is to get Trump back to DC.

“People didn’t think he could get elected President either.  I can predict that him being Speaker would be a great comeback,” he said. Loudon asked him about the potential of being Trump’s Vice President Pick, and Gaetz responded that he would do whatever Trump asked but had a different position in mind.

“I would like to be Attorney General,” Gaetz told Loudon.

Getting Trump back to DC as the Speaker could be the push to get reluctant voters out to the election booths in 2022. And it could also be a catalyst to push people back into the Republican Party with the recent Precinct Committeeman Strategy Project- inspired by Dan Schultz, who is a frequent guest on Steve Bannon’s War Room Podcast.

BUT HOW COULD THE AVERAGE PERSON HELP MAKE THIS HAPPEN?

If people become GOP leaders for their precincts and neighborhoods and influenced the party members to get more America First candidates into the Party and into the Government positions, they could all retake the US House, this could be America’s greatest comeback ever and everyone could be a part of the process.

For more Information on the Precinct strategy:

← Previous Story Trump Destroyed Bush In Explosive Statement: He ‘Shouldn’t Be Lecturing Anybody!”
Next Story → Trump Issues Dire Warning About WHO Is Running Our Military!