AOC’s Own Aunt Throws Her Under The Bus, Exposes Her Lies About Her Family 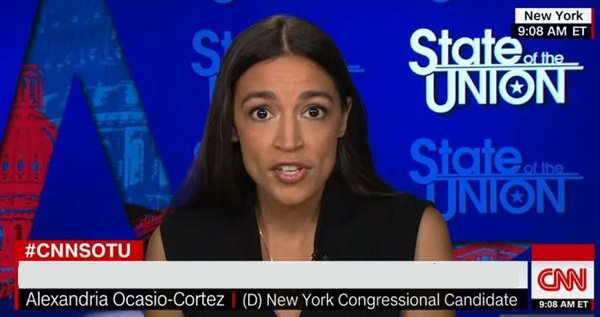 ICYMI – What a shock … the only bartender in history who brings nothing to the table has been caught in another huge lie.

Alexandria Ocasio-Cortez is the poster child for what is wrong with the next generation coming up as Americans.

This girl was born to a professional family and afforded everything that America has to offer. She even became the youngest female congressman without actually knowing anything about politics.

Still she thinks this country is a terrible place and that she is owed anything and everything that pops into her little head .. oh, and you evil white people must pay for it.  Just not when you volunteer to pay for it, like patriots did, donating over $100,000 to help her aunt fix her house in Puerto Rico.

AOC only wants the money when it’s taken from you at gun point … typical gangster.  Now her Aunt it speaking out and exposing the trust being her grandmother’s plight and who is REALY to blame for it … hint, it’s NOT Trump.

‘If the grandmother of U.S. Rep. Alexandria Ocasio-Cortez has suffered in Puerto Ricosince Hurricane Maria in 2017, then Puerto Rican politicians are to blame, not former President Trump.

That’s the assessment of an aunt of the New York Democrat, who was interviewed in Puerto Rico by Britain’s Daily Mail.

Ocasio-Cortez made headlines earlier this month after posting photos from the Puerto Rico home of her 81-year-old grandmother, or “abuela,” Clotilde Rivera, and claiming that the residence remained in disrepair, nearly four years after the hurricane, in part because “Trump blocked relief $ for PR.”

Just over a week ago, my abuela fell ill. I went to Puerto Rico to see her- my 1st time in a year+ bc of COVID.

People are being forced to flee ancestral homes, & developers are taking them. pic.twitter.com/wnRxLalA2D

But when a Daily Mail reporter visited Rivera’s home this week, a woman there who claimed to be AOC’s aunt said the congresswoman’s story wasn’t accurate.

The aunt noted that the Category 5 hurricane caused extensive damage to the island – but insisted Trump wasn’t to blame for residents struggling to receive aid.

“It’s a problem here in Puerto Rico with the administration and the distribution of help,” the aunt told the Daily Mail. “It is not a problem with Washington. We had the assistance and it didn’t get to the people.”

“It’s a problem here in Puerto Rico with the administration and the distribution of help. It is not a problem with Washington. We had the assistance and it didn’t get to the people.”

After Ocasio-Cortez’s June 2 posts on Twitter, conservative commentator Matt Walsh fired back at the congresswoman, saying it was “Shameful that you live in luxury while allowing your own grandmother to suffer in these squalid conditions.”

Walsh later raised more than $100,000 for Ocasio-Cortez’s grandmother until the online campaign was ended – but the congresswoman’s family declined to accept the assistance.’