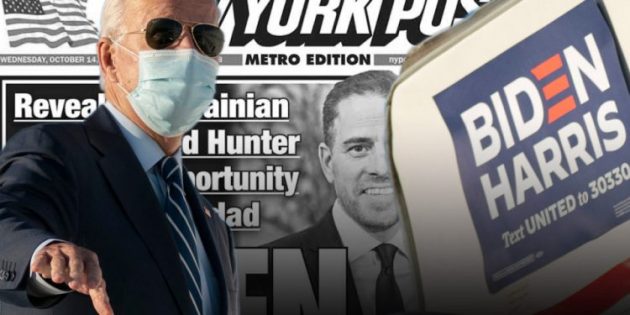 Americans were denied the opportunity to evaluate the evidence that one of the presidential candidates for the 2020 election, Democrat Joe Biden, was implicated in many crimes and that the proof of those crimes may well have been on his son’s laptop, which law enforcement and media had in their hands.

Law enforcement was ignoring it and many of those news outlets were worried about running the stories from the laptop because they were worried about being censored by ‘Big Tech’ and scared of the implications of exposing such complex crimes committed by such influential people.

But now the truth is coming out like a firehose.

“So when Joe Biden said he never talked with Hunter about business dealings, I guess he didn’t count their shared bank account?,” Ronna McDaniel wrote in reaction to a significant report about Hunter Biden’s laptop in the UK Daily Mail.

So when Joe Biden said he never talked with Hunter about business dealings, I guess he didn’t count their shared bank account?

McDaniel would recall that tiny bits of information were leaking out to the public about the laptop during the presidential campaign cycle, thanks to Steve Bannon’s War Room Pandemic podcast.  It was about that time that anyone who reported on the laptop face severe censorship.

But now it is coming out- crimes were committed that Joe Biden would have most likely been involved with.

EXCLUSIVE: Joe Biden could become embroiled in the FBI’s probe into Hunter’s finances, experts say: Emails reveal they SHARED bank accounts, paid each other’s bills, and the president may have even have funded his son’s 2018 drug and prostitution binge

-Emails between Hunter and Eric Schwerin, his business partner at consultancy Rosemont Seneca, show Schwerin was working on Joe’s taxes

-Last December, Hunter admitted in a public statement that he was under federal investigation over his tax affairs

-A former federal prosecutor tells DailyMail.com that if money was flowing between Hunter and his father, that could make Joe a target of the probe

Also, we know that the US Senate Oversight Committee has a full copy of the contents of the laptop because Jack Maxey delivered the contents in a hard drive to Senator Chuck Grassley.

There is a good reason why the laptop and all the players around the cover-up of the laptop need to be investigated because notable people are lying about it. In the article below I explain.

For more reading on the contents of Hunter Biden’s Laptop, which need to be addressed, consider the letter from top intel brass that exposing the contents of the laptop- was a “Russian plot” to help President Trump.