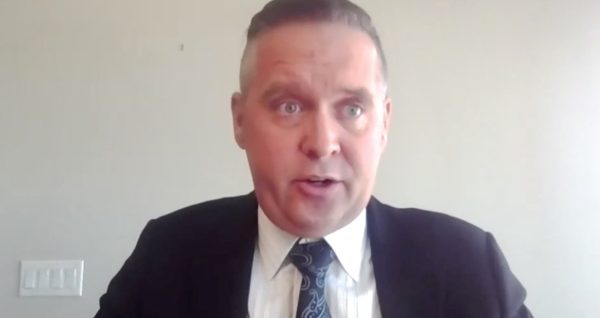 There has been a ton of speculation surrounding the integrity of the top brass of the voting company, Dominion.

We have seen Dominion Voting Systems aggressively counter attack journalists who dare to speculate and/or report on the company’s role in the 2020 election.

There have been many reports out there that Dominion was a politically motivate outfit that cared more about securing a specific result in the 2020 election than they care about ensuring that the election itself was secure.

Seeing as Dominion has chosen to push back against these allegations in court, the targets of Dominion’s lawsuits get to depose members (both past and present) of the Dominion corp.

While the depositions had been under lock and key for sometime, The Gateway Pundit published and exclusive today, containing DEVASTATING VIDEO CLIP FROM THE DEPOSITION of Eric Coomer …

‘Eric Coomer is the former Director of Security and Product Strategy for Dominion Voting Systems. After the 2020 election debacle, where votes in at least five states had very suspicious results while running Dominion computer systems, center-right journalists made common-sense observations that the results appeared rigged. One journalist, who had infiltrated a conference call filled with Antifa-sympathizing callers, remembered that on the call “Eric from Dominion” was going to ensure that Trump did not win re-election.

The mainstream media has spent a year bullying and suppressing the thousands of eyewitnesses, filed affidavits, investigations and proceedings meant to uncover the big fraud.

Instead, they call all speculation as to what caused sleepy Joe Biden to make magical 2 a.m. leaps of hundreds of thousands of votes, propelling him to victory, the “big lie.”

Eric Coomer decided to sue 15 organizations and people for defamation in his home state of Colorado. He claims to have been defamed by center-right journalists allegedly saying he was tied to Antifa, and that he helped rig the election against Trump.

Coomer is the Plaintiff, and a variety of center-right media outlets, including the Gateway Pundit and separately Gateway Pundit Publisher Jim Hoft, are Defendants.

Coomer’s limited deposition was taken on September 23, 2021, and the court acted on its own to seal the deposition without a hearing. The court dramatically limited the subject matter and scope of the duration of the deposition compared to the Defendant’s depositions. This was odd since no other deposition in the case was similarly sealed by the Court letting the left write stories about those depositions, and no party had asked for Coomer’s deposition to be sealed. Primarily, the deposition verified many of the claims found in this fawning New York Times profile of Coomer.

EXCLUSIVELY, the Gateway Pundit is providing:

The deposition reveals Coomer’s penchant for lying: such as when he authored an OpEd in the Denver Post misleading the public in stating that he did not have any social media accounts, and that any Facebook circulating throughout the public were “fabricated,” pretending to be him, but not authored by him.

“I want to be very clear: I have no connection to the Antifa movement, I did not “rig,” or influence the election, nor have I participated in any calls, demonstrations, or other demonstrable activity related to any political party or social justice/action group.

Additionally, any posts on social media channels purporting to be from me have also been fabricated. I do not have a Twitter account and my Facebook account is not active. These individuals are impersonating me.”

HOWEVER, in the deposition, he finally ADMITS that he was the author of those Facebook messages all along.  He had been LYING this entire time.  [Emphasis Is The Work Of The Beltway Report]

Most importantly, Defendant Sidney Powell’s lawyer Barry Arrington was able to pin down Dominion’s Coomer and get him to admit that he had, indeed, written the following Facebook messages prior to the 2020 Presidential election:

“If you are planning to vote for that autocratic, narcissistic fascist asshat blowhard and his Christian jihadist VP pic, UNFRIEND ME NOW!”

“Only an absolute F—-ING IDIOT could ever vote for that wind-bag, f—tard FASCIST RACIST F—! No bull—-, I don’t give a damn if you’re a friend, family or random acquaintance, pull the level, mark an oval, touch a screen for that carnival barker… UNFRIEND ME NOW.”

Coomer then qualified his long-rant against Trump by saying this about Dominion:

“…these opinions are rational, and completely my own. They are based in reason and highly credible. Though they are not necessarily the thoughts of my employer, though if not, I should probably find another job… Who wants to work for completely morons?”

LISTEN TO ERIC COOMER SAY THAT DOMINION SHARED HIS EXTREME-LEFT BELIEFS AND VALUES:

So, by virtue of the fact that Coomer continued working at Dominion, it seems safe to say that Dominion generally shared Coomer’s extreme anti-Trump beliefs.

After the Facebook Posts began circulating throughout the internet, Coomer deleted at least 80 of his posts, later telling colleagues that he ‘screwed up.’ When asked to clarify what that meant, why he would think he ‘screwed up’, he hedged and dodged and tap-danced to avoid the obvious answer: because he was the head of Product Strategy and Security for voting systems in 28 presidential election states in 2020, including every swing state, and yet was publicly posting vicious anti-Trump screeds, including the nastiest comments possible against Trump voters whom he called fascists.

Coomer said of Trump voters, prior to the election, “you deserve nothing but contempt” and they were “absolute F—ing idiots.”

LISTEN TO ERIC COOMER, BEING DEPOSED, ADMIT HE STILL THINKS ALL TRUMP VOTERS ARE “F—ING IDIOTS”:

THIS EXTREME-LEFT ZEALOT WAS THE HEAD OF SECURITY FOR DOMINION.

Coomer tries to say he only ‘screwed up’ because he allowed the political right to make him the ‘perfect villain’ in his words from his personal beliefs, which he assures us had no bearing whatsoever in his professional capacity.

Coomer reveals a lot about himself when he says mid-way through the deposition:

“They [the Defendants, such as the Gateway Pundit] can’t imagine, they can’t imagine having an opinion and being in a position, a supposed position, which I was not in, by the way, to try and affect a free and fair election. To them, them – and I’m talking about your clients – to them, this is inconceivable.

If they were in my position, they would – they would use every resource to exploit that. Why? Because I made some personal statements of a personal political belief. I screwed up because I gave them fodder because they can twist that and use it to fundraise and continue this farce.

That’s where I screwed up. And it’s a farce.”

Coomer is admitting here that he was in a position to affect the election. He hedges his admission, catching himself mid-way through, but his intent is clear. This left-wing nutjob had the position and power to affect election results.

COOMER DEPOSITION EVIDENCE SHOWS HIM SAYING IT WAS “ILLEGAL” NOT TO FLIP ELECTION RESULTS, NOT THAT IT WAS IMPOSSIBLE:

Dominion has been trying to silence these concerns and criticism by separately suing everyone possible who might journalism too much truth against them.

Coomer, like his Antifa brethren, hates the police and celebrates their murder while simultaneously using the judiciary and law enforcement against his political opponents in litigation. Coomer refers to the police generally as “motherf—ing villains” in the deposition. He repeatedly posts songs and song lyrics that praise cop-killing.

Coomer admits that he posted “F— the USA” on his Facebook media. The person who is the head of security for one of the largest national voting systems had regularly expressed the most toxic and extreme left views possible. Coomer admits that he only meant to share these views with his 300 Facebook friends by setting his account to private. Later, when he realized his posts were being reported upon by center-right journalist Joe Oltmann, he deleted some 80+ of his posts.

READ MORE of the EXCLUSIVE VIDEO at the tip of the Patriot’s spear, THE GATEWAY PUNDIT, HERE