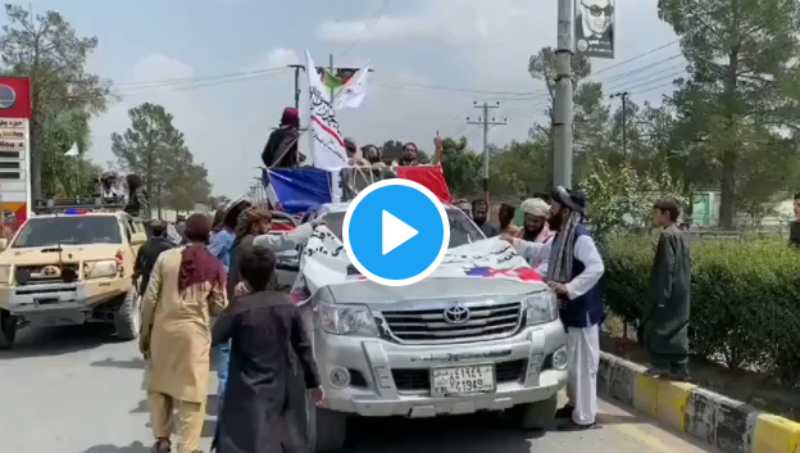 The Taliban didn’t dare rear its ugly head during Trump’s presidency, but a spineless Biden is practically a friend to terrorists. Now that the US has ‘fully’ pulled out of Afghanistan the Taliban has taken to the streets in celebration. Their ‘victory’ over the United States only serves to embolden the terrorist group and solidify their faith.

A fighter and religious leader for the Taliban sitting in Bagram airbase boasted to The Times that he hoped the Taliban could spread their jihad “further into the region and Muslim world”:

“Never in our wildest dreams could we have believed we could beat a superpower like America with just our Kalashnikovs. When you do jihad all doors open. We defeated America with our faith and our guns and we hope now that Bagram can be a base for jihad for all Muslims. For any foreign power considering attacking Afghanistan then look at Bagram now and learn your lesson well before embarking on foolish endeavor. See the West’s mighty technology humbled here by mujahidin. In 15 years as a mujahid fighting the Americans I wondered often if I may fail or die. Yet here is proof of the power of faith and God and jihad. On the back of victory I hope we can use Bagram as a place to spread jihad further into the region and Muslim world.”

In case it wasn't clear from the images, that's a mock funeral of US and NATO. 😬#Afghanistan https://t.co/VdcWchp861 pic.twitter.com/gcxxkKoJvI

Let’s not forget, somewhere around these celebrations are Americans still trapped behind enemy lines. Biden, who failed to make a clean withdrawal from Afghanistan, also failed to successfully evacuate trapped Americans who were not able to make it to the dangerous airports. Many, who reportedly did make it, were violently turned away by the Taliban.

Another video from celebrations in Kandahar today. #Afghanistan pic.twitter.com/zW5nARXU5a

‘It’s no big deal’—That’s apparently the official stance from Biden’s White House. On Monday, Gen. Kenneth McKenzie, head of United States Central Command (CENTCOM), confirmed there were Americans who wanted to leave Afghanistan still on the ground in or near Kabul, and they numbered in the “very low hundreds.”

“We did not get out everybody we had wanted to get out,” McKenzie admitted Monday, adding that diplomatic measures will likely be needed to extract Americans left behind.

“It’s not completely unlike the way we do it elsewhere around the world,” Kirby said when asked how the Biden Administration plans to extract its own citizens from Afghanistan. “We have Americans that get stranded in countries all the time, and we do everything we can to try to facilitate safe passage.”

That might be so, but how many of those Americans were stranded behind enemy lines in hostile terrorist-ridden territories? My fear is that the White House will not hold up his end of the bargain and this will be swept under the rug as the next big Biden-crisis rolls around.

Take a look at the border crisis which has fallen to the backburner, understandably so, in the face of the Afghan-withdrawal. The security issues and immigration problems in the United states only got more complicated as attention to the problem has been pulled away. With the rising threat of potential terrorist attacks looming, it has only been made more dangerous thanks to Biden.