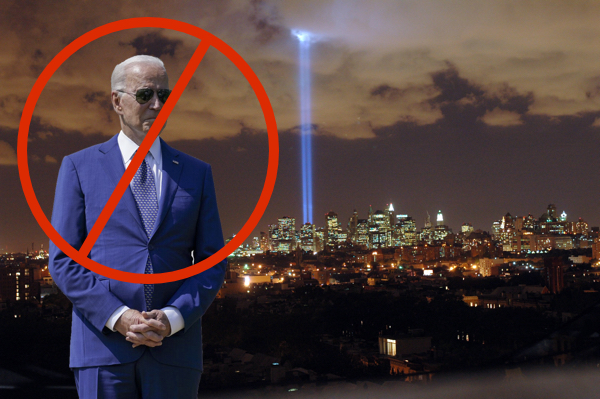 The son of a 9/11 victim gave Biden a brand new nickname that I found to be quite fitting, “killer-in-chief”. Nic Haros Jr says he is outraged at the horrific handling of the Afghanistan withdrawal and says Biden better not ‘show his face’ at the ground zero memorial. Haros’ mother died during the September 11th attack and as the 20th anniversary quickly approaches, plenty of survivors are disgusted with what’s happening in Afghanistan and don’t want Biden to attend.

Haros told Fox & Friends Monday Biden has “no place there” after he left “thousands of Americans and Afghan supporters” in Afghanistan “to die.”

“I am demanding that President Biden do not show his face at Ground Zero on 9/11. It is now holy ground and I really don’t think he has a place there,” Haros said, referencing the upcoming anniversary of the 9/11 terror attacks, which will be marked by a ceremony at Ground Zero, as it is every year.

“It’s shameful for him, I think, to use the dead bodies as a political prop for his so-called victory lap. He is insensitive and he shows no compassion to the families. No Joe, no victory, we are now in the Afghanistan War 2.0,” Haros added, apparently referencing claims, made by several families at the Dover memorial service for the 13 victims of the terrorist attack in Kabul, that Biden kept checking his watch as their sons’ and daughters’ bodies came off planes from Afghanistan.

“Those resurrected victims kept America safe from harm all those years. Biden must not dishonor their grace and patriotism. He has none,” Haros said.

Haros then added that he believes Biden is the “killer-in-chief” because of the hundreds of Americans and perhaps thousands of Afghans left behind following the Biden administration’s swift Afghan exit.

According to reports, nearly 1,800 Americans directly affected by the Sept. 11, 2001, terrorist attacks are opposing President Joe Biden’s participation in any memorial events this year unless he upholds his pledge to declassify U.S. government evidence that they believe may show a link between Saudi Arabian leaders and the attacks.