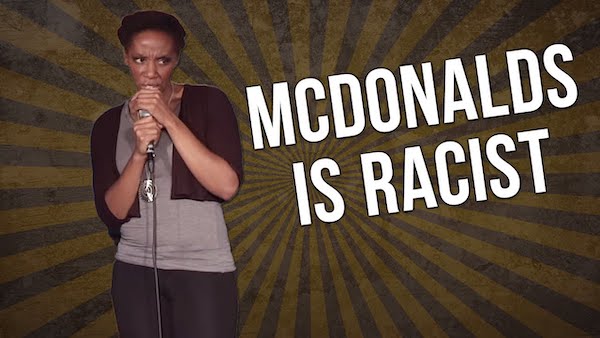 In Case You Missed This a few weeks back …

What I don’t understand if that for my entire 39 years on this planet I have been told that we need to judge people based on the content of the charter, not the color of their skin.

Yet, here we are in the year 2021 and it sure seems to me like almost every single decision made about who gets what job in corporate America has more to do with skin color and gentile structure than competence.

No one on the right gives a flying you know what about anything other than a person’s deeds.  We love having a group of friends and co workers who come from diverse backgrounds … PROVIDED that they were selected, not for some superficial reasons but rather because they were the best person for the job.

I would go out on a limb and say that I bet 99% of people wouldn’t want a job if they got it out of petty or a quota based on their race.  Who wants to be the ‘token’ *insert whatever absurd, meaningless characteristic here*?

Well at McDonalds, apparently all those things we were told to ignore growing up are not the MOST important in finding people to fill their jobs.

Senior Executive Managers will lose their bonuses if they fail to staff more minorities in senior leadership positions.

The company will have a focus on hiring women and minorities for top positions regardless of their talent and abilities.

A press release on the McDonald’s website says that part of the bonuses awarded to top company executives will be based upon their efforts to hire women and what the company terms “historically underrepresented groups” for top corporate positions.

“Beginning in 2021, the Company is incorporating quantitative human capital management-related metrics to annual incentive compensation for its Executive Vice Presidents,” the company said.

In addition to the Company’s financial performance, executives will be measured on their ability to champion our core values, improve representation within leadership roles for both women and historically underrepresented groups, and create a strong culture of inclusion within the Company,” the company said.

The company has clear goals. By the end of 2025, 35 percent of the people in jobs that are at the level of senior director and above will be from underrepresented groups. That metric was at 29 percent in 2020, according to the company.

As for women, the company has set a target of having 45 percent of jobs at the level of senior director and above be women. That number was 37 percent as of 2020, according to the company.

Whatever happened to hiring people based on their ability to get the job done FFS?!

This is, on its face, RACIST & SEXIST.  Who would want a joke if the whole time you have to wonder if you only got it because of your skin tone or plumbing … other than Kamala and HRC that is … SMH.