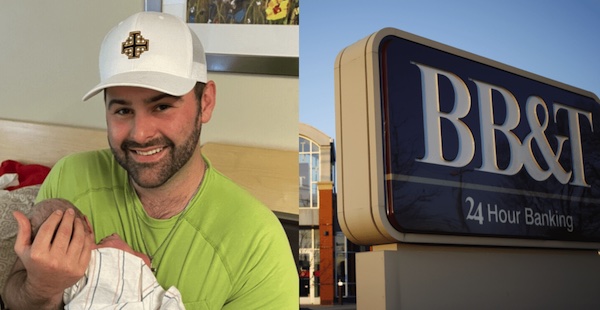 Gab’s Andrew Torba revealed on Tuesday that yet another bank, BB&T, has shut down their account for no seemingly no reason other than politics.

In a letter addressed to Torba that he posted on Gab, BB&T, which merged with Sun Trust in 2019 to become Truist, informed him that they made a decision to close his bank account with them. “This decision is not based on credit reporting information or any other considerations related to your credit,” the letter read. “We have made this decision because some or all of your account activity is not consistent with the intended purpose of the account,” confirming that they had they right to close any account at any time at their discretion.

“Thankfully we’ve spent months getting other banking partners in place who share our values, but this is what we are up against,” Torba wrote in the post, acknowledging the difficulty the free speech social media network has had in getting access to a bank that wouldn’t cancel their account for no reason. National File reported earlier this year that Gab had been banned from four banks in four weeks, due to social media smears of “harboring extremism,” and that it was getting so bad that Torba even considered buying their own bank.

One of those banks was even a supposedly Christian credit union, ECCU, who sold Torba on “working together to build God’s Kingdom only to ban Gab for no stated reason.” Two of the other banks had previously been named as NBT Bank, which mostly operates in the northeast of the country, and the City National Bank of Florida.

“Since the Biden administration came into office Gab has faced tremendous banking challenges,” said Torba, speaking exclusively to National File. He claimed that Operation Chokepoint, an Obama-era program which was originally meant to target banks who worked with firearms companies, is “being weaponized against us for political reasons, just as it was used in a similar way against conservative businesses during the Obama administration.”

“I predict that soon we will see the same level of financial persecution used against churches who refuse to go woke and continue to preach God’s Word,” Torba continued. “Christians and conservatives need to wake up to what is happening in this country. We’re moving beyond simply getting banned from Facebook and Twitter and onto something much worse: they want us banned from the entire financial system,” he concluded.

Ironically, BB&T was once well known for being a libertarian institution, with one of their former chairmen, John Allison, going off to head the CATO Institute, and according to reports, gave their staff members copies of Ayn Rand’s “Atlas Shrugged” to read. However, the current CEO of Truist, which BB&T has now been merged into, has apologized for the bank’s alleged past role in “slavery,” despite being founded in 1872.“