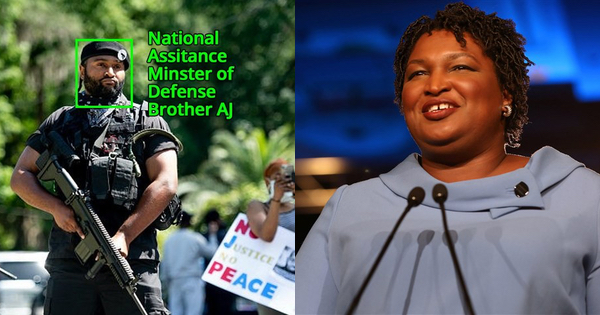 Yesterday we covered a report from The Gateway Pundit that showed a side of the protests against Georgia’s attempts to secure their elections that the media refused to show its viewers.

While the TV cameras showed peaceful people organized to ‘protest against voter suppression’ the cameras conveniently avoided the Black Panther Militia members who were armed with semi-automatic ‘assault rifles’ at the Capitol.

Could you imagine for just a second if there were people in MAGA gear with rifles?  The FBI would already have them in custody and Pelosi, Schumer and the TV would be going on and on about ‘insurrection’.

Now, Imagine if those people with rifles were known militants, part of a gang with a violent history.  This sounds just like the kind of story the media would rehash for days and days, right?

Wrong, and the reason why it’s wrong is simple: the militants are Stacy Abrams supporting Marxists.

‘Earlier today we reported on armed gunmen who were present at the Georgia Capitol early last week.  We have now identified the name of one of the gunmen and the group he’s affiliated with.

We reported earlier that BLM members were present at the Georgia state Capitol last week and they were armed and dangerous.

Now we know that one of the members is known as National Assistance Minister of Defense, Brother AJ.  He has been pictured at other events as well, armed and ready.   Brother AJ and his friends are supporters of Georgia Gubernatorial candidate Staci Abrams.’

This is not a joke, in fact this is the most serious and troubling event of the last year, easily.  The Democrats know their rule is not legitimate, they know the people are aware of it, and they are willing to do anything, and I mean anything to complete their takeover.