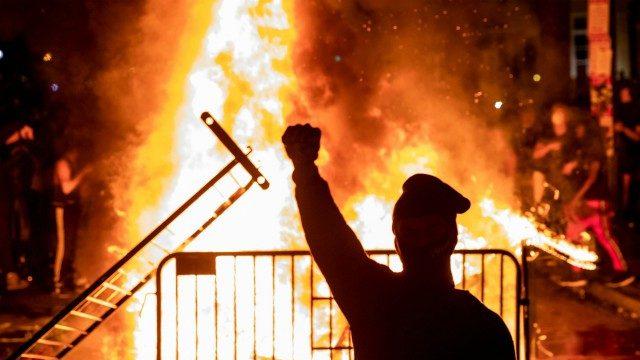 BLM activists just can’t take yes for an answer. Just after Derek Chauvin was found guilty of all charges, BLM and Antifa kicked up the riots in Democratic cities all across the country. They now say they will never be satisfied and that they should burn the whole country down. The jury reached a verdict on the first day but with Democrats including Maxine Waters and Joe Biden intimidating the jury, it was not totally unexpected.

“Yes, we can defund the police. And maybe one day we will abolish the police, but we ain’t gonna do s**t unless we have control over them. That is the number one thing right now. … We’re not gonna let these pigs in these buildings have any more control over our lives today. That s**t ends today.”

BLM SUPPORTER: “WE WILL ABOLISH THE POLICE” #DerekChauvinTrial pic.twitter.com/Zl7MCPkZXW

“We need to go way beyond voting at this point. We need to be coming out here every single day if that’s what it takes, until we get justice for the people that they murdered a week ago that they’ve already forgotten about. … The only reason once again, that we got this conviction, is because we showed up. And if we don’t keep showing up, and if we don’t change laws, and we don’t attack this system, from every single f***ing angle we can, we will be here again.”

BLM MINNEAPOLIS: “..ATTACK system from every single F*CKING angle WE can…” #DerekChauvinTrial pic.twitter.com/j2QNV66oz5

Another BLM supporter said that they are “never gonna be satisfied” and suggested without evidence that what was happening, presumably in the U.S. justice system, constituted a “black genocide.”

“We’re not, we’re never gonna be satisfied,” the BLM supporter said. “Black Lives Matter isn’t a trend. It’s a movement. Black Lives Matter forever, okay? So, we’re not gonna stop just because we’ve got one conviction. We’re happy with the conviction, but we’re gonna keep going. … This is a black genocide. This is more than one case. We’re not satisfied.”

BLM MINNEAPOLIS: “WE ARE NEVER GOING TO BE SATISFIED” #DerekChauvinTrial pic.twitter.com/F1j96NHYCi

Another BLM supporter said that it was “epic” that the Minneapolis Police Department precinct that Chauvin was based out of “burned to the ground.”

“Derrick Chauvin’s Police Department burned to the ground. So we have to remember, those people are still facing challenges for arson. We have to remember that we just set us up a map once again because that was epic!”

“I cannot be anymore peaceful.. this movement has made it’s way to your front door and we are no longer knocking..”

BLM CHANTS: “BURN IT DOWN”

I think BLM’s intentions are clear from this video out of Minneapolis.