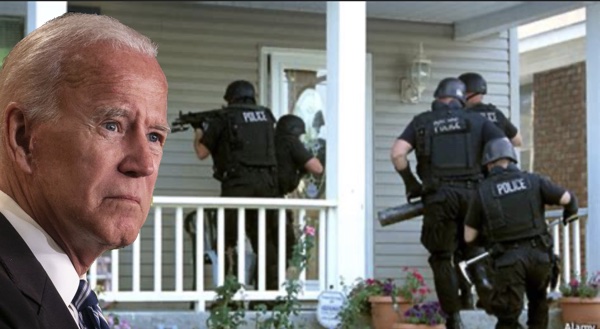 Well, this is the moment we have all been expecting ever since Barack Obama was sworn into office.

The buzz in Washington right now is that the White House (whose mascot is Joe Biden) is preparing to issue a royal decree (you may have heard them referred to as ‘executive orders’) restricting our right to bear arms.

Some of us are hoping that Biden’s brain is so far gone that he thinks the 2nd Amendment is about the ‘arms attached to animals known as bears’ rather than firearms.  However, we are not holding out too much hope seeing as Joe does not appear to be the one who is actually calling the shots … Jokes people, just jokes, sometimes we have to laugh so we don’t lose hope in this ???? world.

While some are worried that Biden is going to go off the reservation and issue a royal decree demanding confiscation, others believe the move is going to be much less confrontational.

Surely the Deep State knows that demanding gun confiscation is on the other side of ‘the line in the sand’ for a lot of Americans.  history has shown us time and time again what happens to citizens who have been disarmed by their governments.  It never ends well for the citizens.

‘President Joe Biden is expected on Thursday to start rolling out executive actions regulating guns after a slew of mass shootings early in his White House tenure put pressure on the longtime advocate for gun restrictions to act.

The announcement is expected to include a presidential declaration that could ultimately require people who buy untraceable, self-assembled “ghost guns” to undergo a background check, said one person familiar with the situation.

The measure is one of several the administration has been working on for months to try to limit gun violence without starting a legal battle that could lead to courts quickly dismantling the policies.

More than 100 House Democrats wrote to Biden last week, according to Politico, urging him to take action on concealed assault-style firearms similar to the one used in the Colorado shooting in which 10 people were killed.

White House spokeswoman Jen Psaki confirmed on Wednesday that Biden would address the issue on Thursday but declined to give details.

The president faces stiff opposition from millions of gun owners, and from gun advocacy groups, who are vigorously opposed to any action perceived as infringing on the Second Amendment.

It’s not just gun advocates assailing Biden on the hot-button issue. As Politico reported, a recent poll found that 57 percent of Americans disapproved of the way Biden has handled gun violence, with opposition from both parties; 42 percent approved.’

The poll question seems to be as useless as tits on a bull.  When asking if someone approves of Biden’s actions on ‘gun control’ the answers are not going to mean anything, here’s why:

Thus the results mean nothing because the question is going to be interpreted differently.  Oh, and one more thing, my right to defend myself, from a government that has been dehumanizing me and half of America who hold traditional values trumps your opinion or desire to strip us our of Gof given rights.

Sorry commies, ‘democracy’ (we don’t even live in a democracy, we live under a democratic republic) does not trump the rights all men and women are endowed with by our creator.  This, I suspect, is why the left hates Christians, Jews and God so much.  Followers of the Judeo-Christian faiths know that government is not the top of the pyramid, God is and as long as God exists in our hearts, government can never have all the power the tyrants who comprise that government lust after.

In other words, God is the only thing standing in the way of complete and total tyranny, and that does not make the tyrants in DC happy, not one bit.