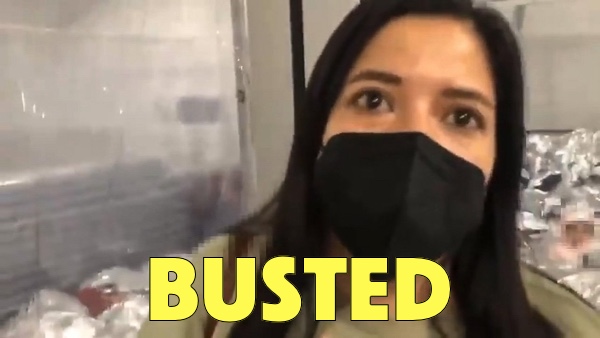 I feel like the Biden Administration is playing ‘Tyranny BINGO’.  The object of the game is for their regime to engage in each and every last hallmark of a tyranny in order to cross the atrocities off their ‘BINGO’ card.

Labeling political dissenters as ‘seditionists’, dehumanizing their political opposition, trying to disarm their ‘subjects’, ruling by Royal Decree (Executive Order), Hiding behind a military and fortification on our own soil, flooding the nation with foreign populations in order to balkanize the nation and crash it’s economy … I could go on with enough tyrannical endeavors to score 50 ‘BINGOS’, but I think you get the picture.

Perhaps the most absurd of all is the Democrats insisting that we are in the middle of the most deadly pandemic in 100 years, using this as an excuse to force us to comply with the destruction of our economy, cover our faces, end human to human contact, and steal our rights.

We have to stay 6 feet apart, but Biden is inviting migrants to flood the nation, and when they do, we are keeping them, quite frankly like stray dogs.  This is 100% at odds with the theory that we are in the middle of a deadly pandemic … if we are to assume that the government is trying to end it.

If they were trying to make it worse, then the video that Ted Cruz just released would make a lot more sense.

‘Last week several Republican Senators visited the US Southern border on the Rio Grande in Texas to witness the massive surge in illegal aliens and fake refugees flooding across the US border in Texas.

What they saw was reprehensible!

Of course, the fake news media is hiding this from the American public!

This also is taking place during the middle of a hundred-year pandemic.

During the visit to the Texas border, the GOP senators visited at least one of the child holding facilities.

When Senator Cruz began filming the unimaginable and depraved conditions, a Biden operative jumped up to harass and attempt to block the Senator’s camera!’

How far is Joe Biden going to stop the American people from seeing inside the Donna CBP facility?

Biden sent a political operative from DC to block our cameras and even threatened another senator to obstruct legitimate congressional oversight. pic.twitter.com/vHT2U7Nh1z

Senator Ted Cruz joined Maria Bartiromo on Sunday Morning Futures where he released the video too.

If Covid is as deadly as we are told, this would be a crime against humanity.  Even if it’s not as deadly as the Black Death, we were told Trump was a savage (for pictures taken during the Obama Administration) for holding illegal migrants in facilities far less inhumane that this.

The fundamental difference between what Trump did and what Biden did is that migrants are being encouraged to rush the border, Trump developed a ‘remain in Mexico’ plan to try and stop having too many migrants to house at one time.

No one wants to see the atrocities at the border happening.  The only logical way to stop this is to stop inviting people to risk their lives to enter the United States of America with the promise of amnesty and government handouts.

At this point any sane person would be suggesting crimes against humanity charges for the Biden regime.