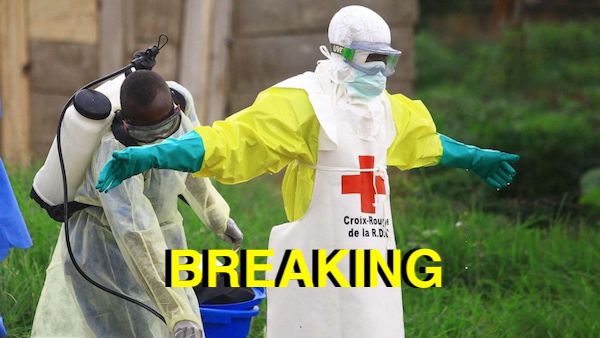 Normally I would just skip over this story and not think much of it, other than to thank God that I am not living in the area and pray for those who are.

However, I can not stop thinking about Bill Gates and how pleased he seemed to know that Covid was going to be used to crush the economy … for the little guys like you and me.

Then I remembered his ominous ‘warnings’ that this Covid pandemic was just the trial run for something else, something much bigger.

What really struck me and stuck with me was both Bill and Melinda’s body language when he said there was another one that would be way more deadly coming:

Wait ,what?  Why are you laughing and what do you know, BILL?

So naturally when I read about a new outbreak of a deadly flesh eating Ebola, which kills at an incredible rate, I thought you may want to hear what the ‘news media’ is saying in these early stages:

The New York Times (I know, I know, take it with a grain of salt, but it’s still worth reading) is reporting, VIA MSN:

‘Ebola, the deadly virus that has increasingly struck Africa in recent years, is once again threatening a violence-scarred region of the Democratic Republic of Congo, three months after the health authorities in the country declared the last outbreak vanquished.

The Health Ministry announced Sunday that the wife of a farmer who had survived the disease died February 3, three days after she first showed symptoms, at a hospital in Butembo, a city of 700,000 in North Kivu province. A blood analysis on the woman performed in Butembo came back positive for the virus, the ministry said.

The World Health Organization said in a statement that its public health researchers were investigating, that more than 70 contacts of the victim had been identified and that disinfection was underway of the sites she was known to have visited.

It was not immediately clear whether the victim’s infection was traceable to the Ebola outbreak that devastated North Kivu for nearly two years starting in August 2018. It killed more than 2,000 people.

That outbreak, which was declared over in June, was the country’s 10th and the second-worst on record, punctuated by recurrent rebel violence in the region and attacks on health workers. Just as it was abating, an 11th outbreak was declared in the western part of the country, which killed 55 people and was declared defeated in November.

Follow our LIVE Updates on the coronavirus pandemic here

The WHO statement said blood samples from the woman who died Feb. 3 had been sent to the National Institute of Biomedical Research’s main laboratory in Kinshasa for genome sequencing to identify the strain of the virus that killed her.

News of the infection came as the Democratic Republic of Congo, like much of Africa, is contending with new waves of infection from the coronavirus, which has already placed severe strains on public-health resources.’

It’s still way to early to tell what will happen with this viral outbreak, but I have a feeling Bill Gates is excited, wherever he is, petting his cat in his subterranean lair.