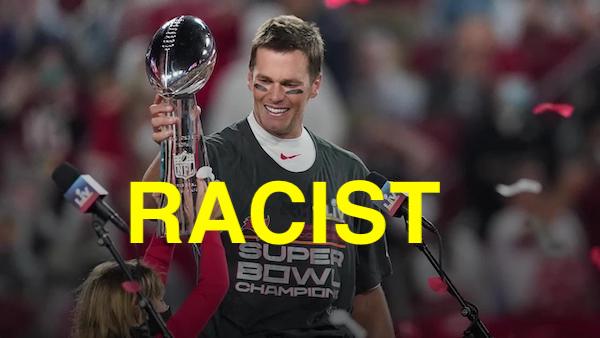 This is not fake news folks- this is the reality we face here in America and quite frankly it’s disgusting.

Most of us have stopped watching professional sports for years since it turned from entertainment to a political sh*t show and basically an infomercial for the domestic terrorist group Black Lives Matter. [Of course we believe that black lives matter, but the Marxist group Black Lives Matter, is a dangerous Terrorist org meant to send the US into a civil war and we have no interest in a Civil War.)

Now, I admit that I did cheat and watched the Super Bowl not was not pleased with the political aspects of the commercials and some of the commentary so I used those unnecessary moments to get up from my desk to crack open a nice cold beer and grab some munchies.

Hate me if you will but I am and have been a huge Tom Brady fan for a hell of a long time.

That being said, this article will show you how sick in the head that the dems and far left lunatics are.

They say that it’s racist that Tom Brady won the Super Bowl.

You just can’t make this garbage up!

Jim Hoft at The Gateway Pundit has more on the insanity:

Of course, this was too much for the left who said Tom Brady winning the Super Bowl on Black History Month was racist.

You knew this was coming.

He also serves as a mirror to Colin Kaepernick, a total failure propped up by millions in corporate Nike sponsorship money – a company that literally lobbies against legislation to ban slave labor. pic.twitter.com/7guMMoNPVd

So seriously folks, is this really what America has become?

Tom Brady is a freaking legend no matter what color he is.

I’ve said it a thousand times and I’ll say it again- since Obama became president all the progress against racism was completely erased and was elevated to a new level I never imagined.

Thanks again to our good friend Jim Hoft at The Gateway Pundit.