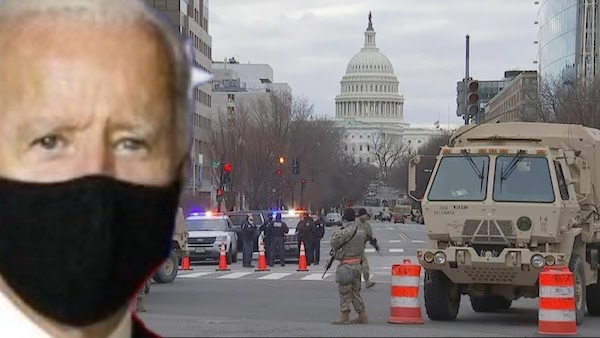 Something terrible is coming.  If you can’t just feel it in the air, there are plenty of other, more concrete signs that the people pulling Biden’s strings are working on something seriously tyrannical.

First, let’s consider the fact that while we are supposedly in the middle of the most dangerous pandemic in a century or more, with 30% of small businesses and 10 million Americans out of work, the Democrats are opening day and night trying to remove Trump from an office he has not held in weeks.

This is a clear assault on Democracy.  The reason they are desperate to convict Trump is so that he can never run again for office.  Another way to say that is: Democrats are trying to take the peoples’ ability to chose who they can vote for to be POTUS away.

Second, the Biden Defense Department has turned inwards in order to purge ‘extremists’ from its ranks.  The quick translation of that is: Biden is weaponizing the military against his political opponents.  We all know where this goes, once conservatives are purged from the military, the military will be used to purge conservatives from society.

Instead of taking up your entire Saturday with this list, lets just cut to the most obvious sign that the Biden Klan is up to no good:

We have talked about this before but now we are being told that the Capitol will remain a banana republic war zone fortified with troops and military vehicles for the rest of the year … which likely means forever.  Tyranny rarely voluntarily retreats.

For me there are two big take aways from the troops’ presence in DC: 1) the initial staging of them for the Inauguration suggests that Biden & co were worried people don’t recognize him as a legitimately elected President.

Their continued presence suggest the regime must be planning something that would require the US military to protect the regime from We, The People.

‘The Biden National Security Council is planning on having National Guard troops continue to occupy the nation’s capital through the end of the year, according to a report by WTTG-TV Fox 5 in Washington, D.C. Additionally, active duty and reserve troops are being considered for deployment.

The National Security Council is asking the Department of Defense to engage Capitol Police on planning for post-March 12th support, according to the e-mail.

…Robert Salesses who began Performing the Duties of the Assistant Secretary of Defense for Homeland Defense and Global Security on January 20, 202, wrote in the e-mail:

“If it’s not possible to sustain at the current level with NG personnel, we need to establish the number of NG personnel (DCNG and out-of-state) we can sustain for an extended period – at least through Fall 2021 – and understand additional options for providing DoD support, to include use of reserve personnel, as well as active component.”

The current authorized deployment of 7,000 National Guard troops in D.C. runs through March 12, coming in at a cost of nearly half-a-billion dollars since the January 6 riot at the Capitol. Guard deployment topped out at around 25,000 during the Biden inauguration.

Stars and Stripes reported this week that an indefinite deployment of 5,000 Guard troops is planned for after March 12.

Bottom-line: This is not normal, and not something you see in a free society.  This is what you would expect to see in North Korea or in Stalin’s USSR.  Keep your head on a swivel, and remain peaceful at all times.