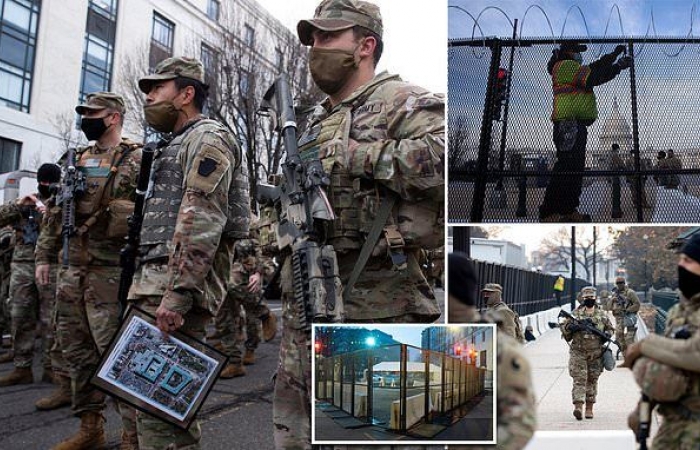 Can you think of a reason why you would want to disarm AND deny American citizens the right to self defense … during an event that you think is so dangerous or vulnerable  to attack that you deploy more troops to guard it than we have sent out in our forever wars (Thanks Obama, thanks Bush)?

Barriers everywhere, armed troops, check points, it might as well be the reincarnation of the Berlin Wall for crying outloud.

Supporters of President Donald Trump stormed the U.S. Capitol and rioted Jan. 6 as lawmakers were attempting to certify the electoral college votes. As a result, fencing and security screenings have been put around the Capitol and 25,000National Guardsmen have been sent to Washington, D.C., to secure the inauguration.

Amid the extra security, Capitol Police reportedly said that members of the press will be denied entry if they have protective equipment like a helmet, The Hill’s Alex Bolton tweeted.

“Capitol Police is informing reporters that any member of the press trying to go through security screening with a bullet-proof vest will be denied entry. Reporters told they cannot wear vests, gas masks, or helmets,” according to Bolton.’

Capitol Police is informing reporters that any member of the press trying to go through security screening with a bullet-proof vest will be denied entry. Reporters told they cannot wear vests, gas masks, or helmets.

Now ask yourself, why on Earth would the ability to defend one’s self be stripped from Biden’s adoring fans … all while 25,000 armed troops with shoot to kill orders have been dispatched for the event, which is beginning to look like something out of 1984?

I have a theory why, and even if there is a 1% chance I am right, PLEASE steer clear of Washington DC tomorrow … and white frankly, forever.