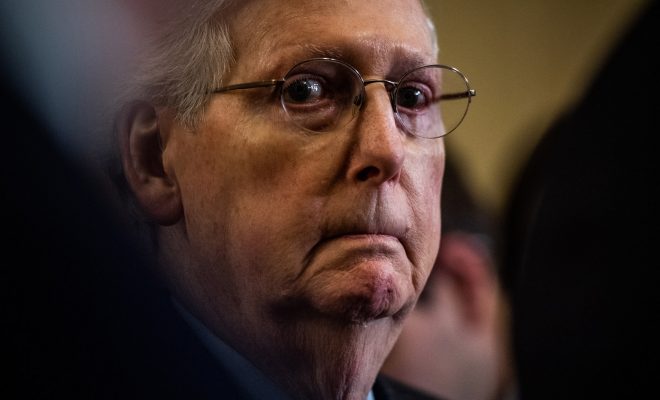 Don’t look now but the radicals are popping their hooded heads back out after dark again.

Last night we covered reports that Nancy Pelosi’s multimillion dollar San Francisco home was vandalized with spray paint and a severed pig’s head.  Obviously, we condemned the disgusting attack on the Speaker of the House’s home.

I think it goes without saying that we denounce this reprehensible attack on Mitch McConnell, his family and their personal sense of safety as well.

While we are by no means fans of Mitch, no one deserves to be intimidated by a faceless coward, or group of cowards, not Nancy, not Mitch, not anyone.

McConnell’s Highlands home in Kentucky was discovered Saturday morning marked with angry messages, including “where’s my money,” “Mitch kills poor” and expletives. The graffiti could be seen in photos posted online.

In a statement Saturday morning, McConnell condemned the act while reiterating his support for First Amendment rights.

“I’ve spent my career fighting for the First Amendment and defending peaceful protest,” the statement read. “I appreciate every Kentuckian who has engaged in the democratic process whether they agree with me or not.”

“This is different,” he continued. “Vandalism and the politics of fear have no place in our society.”

“My wife and I have never been intimidated by this toxic playbook. We just hope our neighbors in Louisville aren’t too inconvenienced by this radical tantrum.”

The messages appear to reference McConnell’s refusal to provide a vote on $2,000 stimulus checks after the House passed a measure earlier in the week.’

While the populist movement seeks to grow the economy and with it, increase the fortunes of EVERY American, it seems that the Democrat Party would prefer to lower the standard of living so that each American can live in the same level of misery.