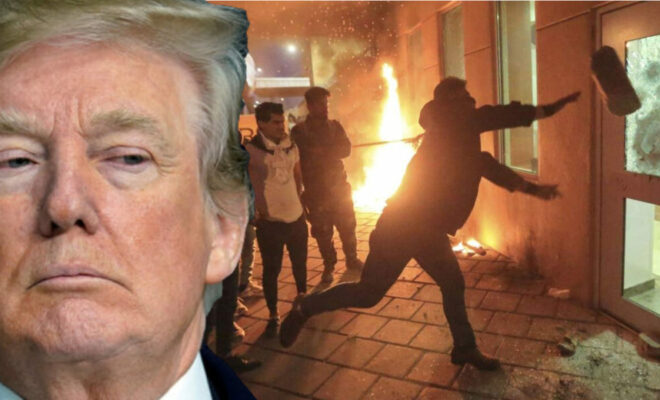 Opinion| Lawrence David| While at the Southern White House at Mar-a-Lago, where he was to welcome in the New Year, President Trump made himself available to answer questions from the press.

Naturally, the president was asked about the growing unrest surrounding our embassy in Iraq, unrest that is being fomented by terrorist militias connected to Iran.

Q: What do you want the American people to know, Mr. President, about how you’re handling the situation in Iraq, as it relates to Iran?

PRESIDENT TRUMP: Well, I think it’s been handled very well. The Marines came in. We had some great warriors come in and do a fantastic job. And they were there instantaneously, as soon as we heard. I used the word “immediately”; they came immediately. And it’s in great shape, as you know. This will not be a Benghazi. Benghazi should never have happened. This will never, ever be a Benghazi.

This will not be a Benghazi. Benghazi should never have happened.

President Trump may or may not have meant this as a shot against former Secretary of State Hillary Clinton and President B. Hussein Obama, but in the broader context of achieving geo political goals beneficial to the United States, Trump doesn’t go in for theater.

Coincidentally, Trump has shown his willingness to give his political enemies every opportunity to attack him, confident in the knowledge that he has truth and common sense on his side.

The previous administration… not so much.

Trump wants results.  And, he wants those results without sacrificing American lives.

After three years we have seen the Trump doctrine – economic security equals national security – work to achieve desired results without sacrificing the lives of those in the military.

President Trump’s decision to send an additional 100 marines to fortify those already protecting our embassy is a pre-emptive move designed to discourage the Iranian-backed militias from carrying out their planned attack on the embassy.

Very proud of President @realDonaldTrump acting decisively in the face of threats to our embassy in Baghdad.

He has put the world on notice – there will be no Benghazis on his watch.

There will be no propaganda videos coming from this embassy like there was after the carnage of Benghazi.

To our Iraqi allies:

This is your moment to convince the American people the US-Iraq relationship is meaningful to you and worth protecting.

Protect our American personnel. You will not regret it.