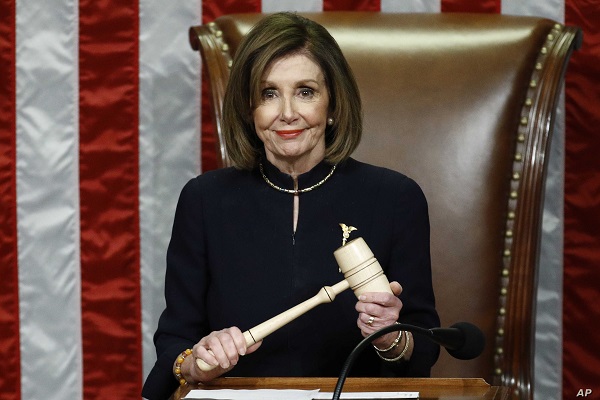 A lot of ignorant so-called legal analysts in the Fake News media have gotten it wrong about Pelosi’s withholding of the articles of impeachment.  The argument goes that the president is not impeached until the drunk lady delivers the articles to the Senate.

Their argument is based on their total misunderstand of how the Constitution actually works.

Article I, Section 2, Clause 5 of the Constitution says that The House of Representatives …  shall have the sole Power of impeachment.

Article I, Section 3, Clause 6 says The Senate shall have the sole Power to try all impeachments.

The Constitution recognizes the office of Speaker of the House, but Pelosi is not the House itself, that is made up of all the members.  She’s only an officer of the House. Nothing in the Constitution gives her a presidential-style veto, and there’s nothing in there that grants her any authority to block, or even suspend, formally-adopted bills or resolutions.

On the contrary, if the Speaker holds back a formally-adopted impeachment resolution as a way to influence a Senate trial and their procedures, she is unconstitutionally interfering with the Senate’s “sole Power to try all Impeachments.”  She is abusing her power, which is ironically what one of the articles of impeachment charged against President Trump.

And it’s not a gray area either.  The Constitution literally specifies cases where a formal notification is necessary for an action to be valid. The Founders who write the Constitution considered it important to do so.  This is because most were lawyers and they knew that under their legal system some documents were valid as soon as they were signed while others had to be formally delivered to a particular recipient.

Here are some cases in the Constitution where it is required to have a formal delivery, or some sort of notification, at least, to be valid:

A bill must be “presented” to the president for signature before it becomes a law.  If the president doesn’t sign it, he must “return” it with his objections to the bill, but if he doesn’t send it back within 10 days, it becomes law with or without his signature.

Most resolutions or orders must be “presented” to the president for his signature as well.

Here’s the kicker.  There is a well-known and well-accepted legal principle during the time of the Founding, and it carries on to this day, that if you list certain items, that list implies that whatever is not included on that list is excluded and cannot be referenced as if it was later on. In other words, “if it ain’t there, it ain’t there.”

Since there is no written requirement that the House must formally notify or present the articles to the Senate that it passed articles of impeachment, then that idea ain’t there.

The world watched the vote on TV, and the Congress assuredly recorded it.  The president has been impeached, regardless of the lawlessness attempted by Nancy Pelosi.

I believe Senate Majority Leader Mitch McConnell knows this, but in today’s woke world of Fake News media, he doesn’t want to be attacked for asserting his Constitutional authority by exposing Pelosi as the Constitutional ignoramus that she happens to be.