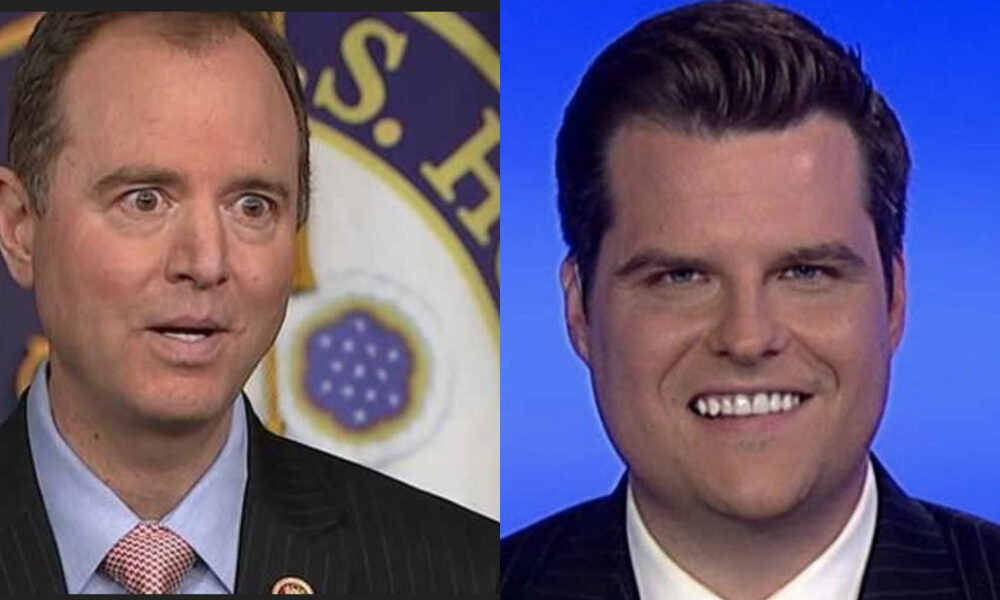 Opinion, Analysis, Speculation –  Adam Schiff, in my opinion, has less integrity than …. well, I can not even think of an example, of anyone, I think has less honor than Congressman Schiff.

Just wait until you see the clip Rep Gaetz posted to Twitter, it exposes Schiff as a total hypocrite, IMHO. But it’s important to understand that Schiff has a long history of this kind of behavior.

He has seemingly made statements, which I can only imagine that he knew to be false, about President Trump and ‘Russian Collusion.’  Remember when he suggested, without actually saying it, while being interviewed by Charlie Rose, that had ‘seen the evidence’ back in 2017.  Can you tell this guy is a lawyer?

SCHIFF: You know, I have said yes, and I — I still maintain that there is evidence of collusion, but I want people to understand, we are at the very beginning of an investigation, and we need to follow the evidence wherever it leads. I’m not prepared to make any conclusions about the strength of the evidence once we conclude our investigation.” SOURCE

Os this time, as the Washington Examiner documented in August of 2018:

‘Rep. Adam Schiff, D-Calif., refused to concur when asked Sunday if he would agree that there has been no evidence of collusion or conspiracy between the Trump campaign and Russia, arguing there is, instead, “plenty of evidence” in “plain sight.“

During an interview on CBS’s “Face the Nation,” host Margaret Brennan said she wanted to “drive distinctions as we’ve been saying here that some of the facts can get muddled here in the president’s language.”

“I want to make sure we’re being precise in our conversation. Can you agree that there has been no evidence of collusion coordination or conspiracy that has been presented thus far between the Trump campaign and Russia?” she said.

“No, I don’t agree with that at all. I think there’s plenty of evidence of collusion or conspiracy in plain sight. Now, that’s a different statement than saying that there’s proof beyond a reasonable doubt of a criminal conspiracy. Bob Mueller will have to determine that,” Schiff said in response.’

Spoken like a true lawyer. Says one thing, in my opinion, likely knowing that it is not the case, when follows it up with a punt to Mueller.  This sounds a lot like ‘gaslighting’ to me, but hey, I’m no shrink.

Well, we all know that 4 investigations have cleared Trump of the ‘Russia Collusion’ charges and seemingly exposed the entire charade as a plot to entrap Trump into obstructing justice.  To be clear that’s my opinion, not a proven fact.

Now that his false narrative of President Trump, one of the most proud, confident and at times, let’s be honest, arrogant men, was a puppet of a 2nd class nation such as Russia (who has a GPD similar in size to Italy, has been debunked, Schiff has moved on to jumping on the Ukrainian obstruction narrative. A narrative, which in my view, is just more ‘projection’ from the Democrats.

In case you missed it, Schiff, just last week, misled the American People and the world, on the floor of the House of Representatives when he, as Breitbart put it “performed’ a false and outrageous “conversations between Trump and Ukrainian President.”

The White House released a transcript of a phone call between Trump and Zelensky on Wednesday, but Schiff made up and fabricated his own transcript that he read at the hearing, which sought to create the quid pro quo that Democrats have accused the president of making.”

“This is the essence of what the president communicates,” Schiff began.

“We’ve been very good to your country. Very good. No other country has done as much as we have. But you know what? I don’t see much reciprocity here. I hear what you want. I have a favor I want from YOU though. And I’m going to say this only seven times so you better listen good,” Schiff read from his fabricated conversation.

“I want you to make up dirt on my political opponent, understand? Lots of it,” he continued.

“On this and on that. I’m gonna put you in touch with people and not just any people,” he continued, affecting an accent meant to resemble Trump’s. “I’m going to put you with the attorney general of the United States, my attorney general Bill Barr. He’s got the whole weight of the American law enforcement behind him.”

“And I’m gonna put you in touch with Rudy, you’re gonna love him, trust me,” Schiff said, still avoiding any real quotations from the transcript. “You know what I’m asking, so I’m only going to say this a few more times, in a few more ways. And by the way don’t call me again. I’ll call you when you’ve done what I’ve asked.”

Schiff said of his made-up conversation, “This is in sum and character what the president was trying to communicate.”

Republican lawmakers slammed Schiff for making up the conversation entirely, instead of going off the transcript of what was actually said between Trump and Zelensky.

And that ^^^^ is why I say that Schiff has no integrity, in my view. This sure feels to me like an attempt to mislead the American people and the world as to the nature of President Trump’s call with Ukraine.

Remember when Schiff was caught on tape doing exactly what he was accusing President Trump of?  We do, in fact we have the tape:

Well, well, well, another Democrat projection scam seems to be coming undone, but hey, that’s just like, my opinion, man. for the record, this clip is not new, it has been around for some time, but is relevant now, more than ever IMHO.  Have you signed up for SPREELY.com yet? It’s like FB, but without the ‘blue shirt” thought police!