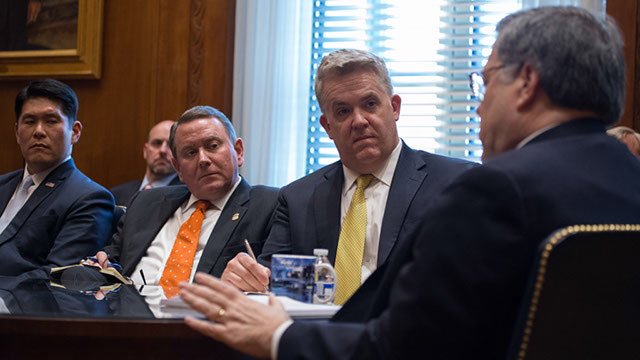 Opinion| Attorney General William Barr sat down with CBS’s Jan Crawford for an interview on Friday morning, during which he went over the “investigations of the investigators” that the Department of Justice are currently working on.

The Washingont Examiner explains that during the interview, “Barr described what tasks U.S. Attorney John Durham, Justice Department Inspector General Michael Horowitz, and U.S. Attorney John Huber have been assigned regarding the origins of the Trump-Russia investigation and the conduct of the DOJ and FBI as they carried it out. Following pressure from congressional Republicans, then-Attorney General Jeff Sessions announced in March 2018 that Huber, a U.S. attorney from Utah, had been picked to review any misconduct by the DOJ and FBI. Some Republicans had been calling for a second special counsel.”

Barr explained that Huber hadn’t done a single thing, and a team set up under United States Attorney John Durham took over.

Jan Crawford questioned, “Um, what’s the status of Huber’s investigation in Utah? I think the former Attorney General Sessions had asked him to look at this.”

Barr responded, “Right, so Huber had originally been asked to take a look at the FISA applications and the electronic surveillance but then he stood back and put that on hold while the Office of Inspector General was conducting its review, which would’ve been normal for the department. And he was essentially on standby in case Mr. Horowitz referred a matter to him to be handled criminally. So he has not been active on this front in recent months and so Durham is taking over that role. The other issues he’s been working on relate to Hillary Clinton. Those are winding down and hopefully we’ll be in a position to bring those to fruition.”

Crawford questioned, “So he won’t be involved in this really at all then?”

The CBS host asked Barr, “This is his role, it’s done?”

Take a look at the interview:

Via the Washington Examiner:

Huber’s long-running inquiry has long been shrouded in mystery, but Barr revealed Horowitz and Durham have taken over most of his responsibilities.

Barr said “Huber had originally been asked to take a look at the FISA applications and the electronic surveillance” but that he then “stood back and put that on hold while the Office of Inspector General was conducting its review.”

Barr said Huber “was essentially on standby” in the event that Horowitz “referred a matter to him to be handled criminally.” That apparently has not been necessary, as Barr said “he has not been active on this front in recent months.” Barr said Durham would now be taking over Huber’s role in handling any criminal referrals from Horowitz and Huber’s involvement with Trump-Russia matters was done.