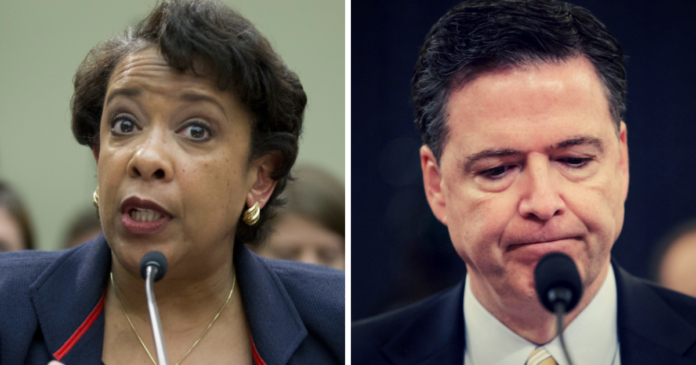 The heat just got turned up in the kitchen. It seems that former Attorney General Loretta Lynch has now accused discredited former FBI Director James Comey of mis-characterizing her statements by repeatedly alleging, under oath, that Lynch privately instructed him to call the Hillary Clinton email probe a “matter” instead of an “investigation.”

Lynch has testified that Comey’s comments left her “quite surprised.” She made the controversial remarks at a joint closed-door session of the House Oversight and Judiciary Committees last December.

A transcript of her testimony was released on Monday by House Judiciary Committee ranking member Doug Collins, R-Ga.

This confrontation marks the latest public dispute to occur among high-level ex-Obama administration officials, as a number of government reviews of potential FBI and Justice Department misconduct continue.

In a June 2017 interview under oath with the House Intelligence Committee, Comey said Lynch had pressed him to downplay the significance of the Clinton email review in September 2015. This was just before a congressional hearing in which Comey was expected to be asked about the investigation. Comey said the moment led him to question her independence and contributed to his decision to unilaterally hold a press conference in July 2016 announcing the conclusions of the probe.

“The attorney general had directed me not to call it an investigation, but instead to call it a matter, which confused me and concerned me,” Comey testified. “That was one of the bricks in the load that led me to conclude, ‘I have to step away from the department if we’re to close this case credibly.’”

Comey went on: “The Clinton campaign, at the time, was using all kind of euphemisms — security review, matters, things like that, for what was going on. We were getting to a place where the attorney general and I were both going to have to testify and talk publicly about. And I wanted to know, was she going to authorize us to confirm we had an investigation? … And she said, ‘Yes, but don’t call it that, call it a matter.’ And I said, ‘Why would I do that?’ And she said, ‘Just call it a matter.’”

Comey has said that Lynch’s secret airport tarmac meeting with Bill Clinton in the summer of 2016 later completed his assessment that Lynch lacked independence.

But in her testimony in December, Lynch said Comey had completely mischaracterized the situation.

“I did not,” Lynch responded when asked if she had “ever” told Comey to call the investigation a “matter.”

“I have never instructed a witness as to what to say specifically. Never have, never will,” Lynch continued. “In the meeting that I had with the Director, we were discussing how best to keep Congress informed of progress and discuss requesting resources for the Department overall. We were going to testify separately. And the concern that both of us had in the meeting that I was having with him in September of 2015 was how to have that discussion without stepping across the Department policy of confirming or denying an investigation, separate policy from testifying.

“Obviously, we wanted to testify fully, fulsomely, and provide the information that was needed, but we were not at that point, in September of 2015, ready to confirm that there was an investigation into the email matter — or deny it,” Lynch added. “We were sticking with policy, and that was my position on that. I didn’t direct anyone to use specific phraseology. When the Director asked me how to best to handle that, I said: What I have been saying is we have received a referral and we are working on the matter, working on the issue, or we have all the resources we need to handle the matter, handle the issue. So that was the suggestion that I made to him.”

When Lynch was pressed for her reaction to Comey’s statements, Lynch said they had come as a shock.

“Excuse me. Ms. Lynch, so in the meeting with the FBI Director you referred to the Clinton investigation as a matter — I just want to make sure I understand — but you did not instruct the Director when he testified in front of Congress to call it a matter. Is that accurate?” Jordan asked.

“I said that I had been referring to — I had been using the phraseology,” Lynch responded. “We’ve received a referral. Because we received a public referral, which we were confirming. And that is Department policy, that when we receive a public referral from any agency, that we confirm the referral but we neither confirm nor deny the investigation. That’s actually a standard DOJ policy.

“So in the meeting with the Director, which was, again, around September — I don’t recall the date — of 2015, it was very early in the investigation, I expressed the view that it was, in my opinion, too early for us to confirm that we had an investigation,” Lynch said. ” At some point in the course of investigations, as you all know from your oversight, it becomes such common knowledge that we talk about it using the language of investigation and things, but at that point we had not done that and we were not confirming or denying it. We weren’t denying it at all. There was, just essentially, in my view, we were following the policy. And when the Director asked me about my thoughts, I said, yes, we had to be — we had to be completely cooperative and fulsome with Congress for both of us, and that we needed to provide as much information as we could on the issue of resources.”