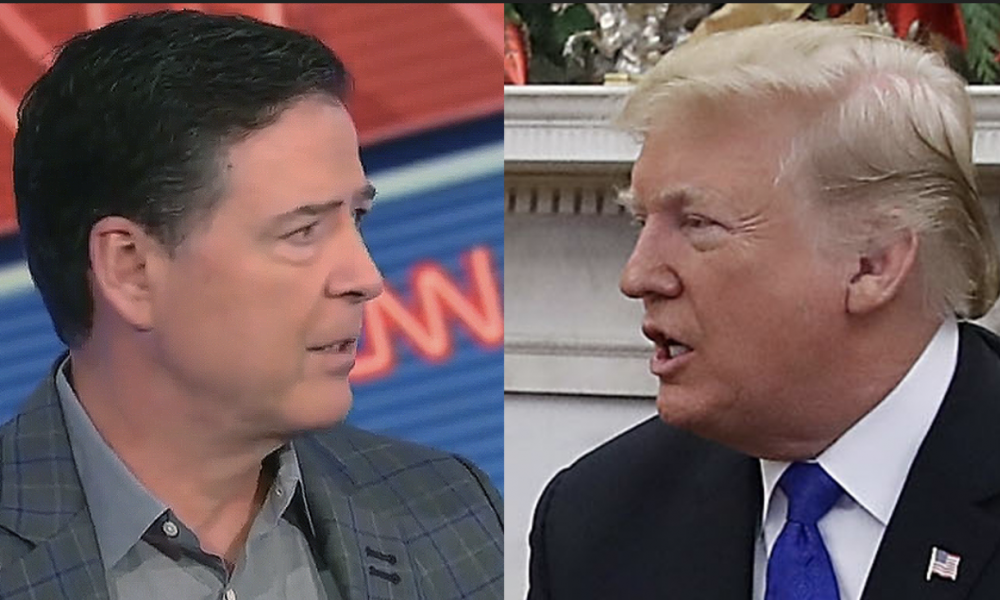 “In a CNN town-hall-style meeting, Mr. Comey was asked by host Anderson Cooper whether Mr. Trump acted with corrupt intent to interfere with an ongoing investigation,” the Washington Times reports.

“It sure looks that way,” Comey answered, going on to stated that he “based that judgment on his reading of special counsel Robert Mueller’s report and leaning most heavily on Mr. Trump’s order to White House Counsel Don McGahn to fire Mr. Mueller.”

When Mr. Cooper asked the former FBI chief whether he agreed with an open letter from numerous federal prosecutors that Mr. Trump would already have been indicted on obstruction of justice charges if he were not the president, Mr. Comey was emphatic.

It has been a longstanding Justice Department policy that a sitting president cannot be indicted.

Attorney General William P. Barr has said, though, that Mr. Mueller’s decision not to charge Mr. Trump was not based on that policy alone.

Comey stated that the question of when a president could be indicted is an awkward one.

According to the Times, the former FBI Director stated that Robert Mueller, “in writing his report, seemed to be balancing Justice Department policy with building a factual record that could be used in other circumstances, such as Congress’s power to impeach a president.”

“I can tell you from personal experience … that can be misinterpreted,” he stated, clearly ignoring his own actions in the case involving Hillary Clinton’s infamous emails.

Although he stated on Thursday that “corrupt intent could be inferred about Mr. Trump for his actions though, he declined to bring charges against Mrs. Clinton because, he said, such intent could not be proven,” the Times explains.

When asked whether Mr. Trump could be indicted in 2021 or 2025 when he is no longer president, Mr. Comey said that was in play.

“The Justice Department will have to take a serious look at that,” he said.

Mr. Comey also dismissed another defense of Mr. Trump — that the president by definition cannot obstruct justice by exercising his legitimate constitutional powers to run the executive branch.

“The president is not above the law.” he said, calling the theory pushed by, among others, Harvard law professor Alan Dershowitz “crazy and a recipe for lawlessness.”