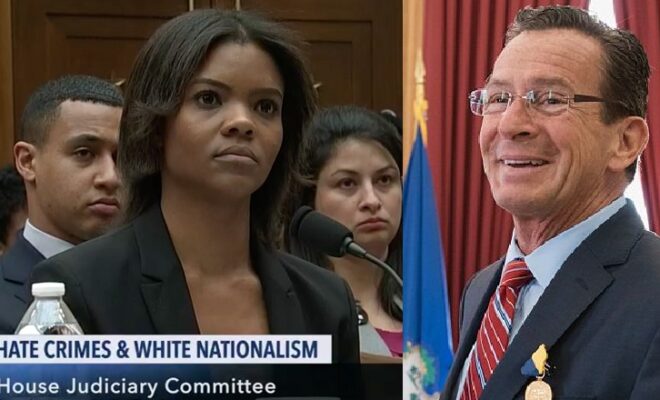 The Mainstream Media Is Silent After Candace Owens Tells How Democrat Governor’s Son Calls Candace Owens The N-Word & Threatens To Murder Her And Her Family!

Owens will never forget the phone call she received in high school where a group of boys, one identified as then-Mayor Malloy’s son, threatened to tar and feather her family, put a bullet in the back of her head and called her a n****r.

Ever hear this story? Democrats obviously live by different standards than what they expect from Republicans.

Candace Owens went back to that painful time of her life when she spoke at the House hearing on White Nationalism.

Though the whole experience from her high school years would leave her with an eating disorder and suicidal ideation, she handled the young boys with grace, wondering how those events negatively affected them too.

Candace Owens stood out from other speakers at the hearing, as she tore down the curtain exposing democrats for their “fear mongering” to gain “power and control,” pointing out that they don’t really care about racism as they say they do.

Democrats tried to de-legitimize Owens before she even took the stand to testify.

“We’re hearing [terms like ‘white nationalism’] sent around today because what they want to say is that brown people want to be scared, which seems to be the narrative that we hear every four years ahead of a presidential election,” Owens said during her opening remarks.

Owens sat with her 74-year-old grandfather behind her. She noted that he “grew up in an America where words like ‘racism’ and ‘white nationalism’ held real meaning under the Democratic Party’s Jim Crow laws.”

Owens boldly stated that democrat’s only real concern was for the 2020 election and their “hate crime concerns” are only a strategy to win.

Candace Owens is the Communications Director for Turning Point USA, a conservative organization that works on organizing college students. Owens is well known for her work in getting more African Americans to vote Republican.

Her argument against democrats is that they have only hindered her community with their policies, rather than help them. Judiciary Committee Republicans invited Owens to the hearing.

Journalists seemed confused as to why Candace was at the hearing, but she cleared that up right away. In her opening statement she told the confused journalists that she was there because she is the victim of a hate crime and they probably haven’t heard about it because she doesn’t fit the leftist media’s idea of what a black person should be.

“We hear over and over again about black conservatives, who have the audacity to think for themselves and become educated about our history and the myth of things, like the southern switch and the southern strategy, which never happened,” she said.

“There isn’t a single adult today that in good conscience would make the argument that America is a more racist, more white nationalist society than it was when my grandfather was growing up and yet we are hearing these terms center around today because what they want to say is that brown people need to be scared which seems to be the narrative that we hear every four years right ahead of a presidential election,” Owens boldly stated.

“The biggest scandal in American politics is that Democrats have been conning minorities into the belief that we are perpetual victims all but ensuring our failure. Racial division and class warfare are central to the Democrat party platform. They need Blacks to hate whites, the rich to hate the poor.”

Next Story → ‘Being Nice’ is Now a ‘Tool Of White Supremacy,’ Says Social Justice Group