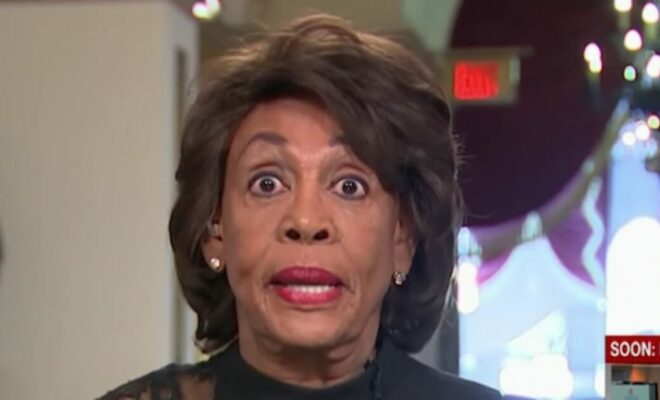 Waters and MSNBC’s Joy Reid were discussing the report and how it had put the lie to Democrats tin foil hat conspiracy theory that Trump and Putin launched a plot to rig the 2016 presidential election while being peed on by prostitutes in the basement of the Kremlin.

For the whacked out California congresswoman, three separate investigations are still not enough to silence the batty woman.

“This is not the end of anything!

“This is the— well, it’s the end of the report and the investigation by Mueller. But those of us who chair these committees have a responsibility to continue with our oversight.

“There’s so much that, uh, needs to be, you know, taken a look at at this point,  and so it’s not the end of everything.”

This is what passes as reason for Mad Max these days:

Someone should tell her, and the rest of the Democrats, that they were elected to legislate first and provide oversight second.

A rational person would consider the collusion issue settled.  Especially if they had stopped ranting long enough to have read Mueller’s finding that Trump, and his campaign members told the Russians to pound sand when they offered to help him get elected:

Mad Max really isn’t that mad.  She’s beating a dead horse before the dead horse rises up and beats her and the rest of the Dems.

If you’re wondering what would cause an entire political party to suffer a simultaneous year-long psychotic episode and ignore the findings of a special counsel who they spent two years telling us was the most qualified investigator, one conclusion is that they feel that they have nothing to lose.

That they are neck-deep in participating or hiding the corruption of the Obama administration and Hillary Clinton’s campaign.

They know that Trump’s Justice Department, left unfettered to actually do law enforcement work, will expose it all and reign pain down on each of them.

What else would explain ignoring their legislative mandate to usurp the investigative authority of the DOJ and the FBI?

← Previous Story Obama’s AG, Loretta Lynch, Could Be Facing A Decade In Prison After She Is Caught Lying To Congress & Obstructing Justice If Lisa Page’s Testimony Is True
Next Story → Kim Foxx Facing a Possible 20 Years In Prison for Corruption in Smollett Case, Says Former Assistant Attorney General