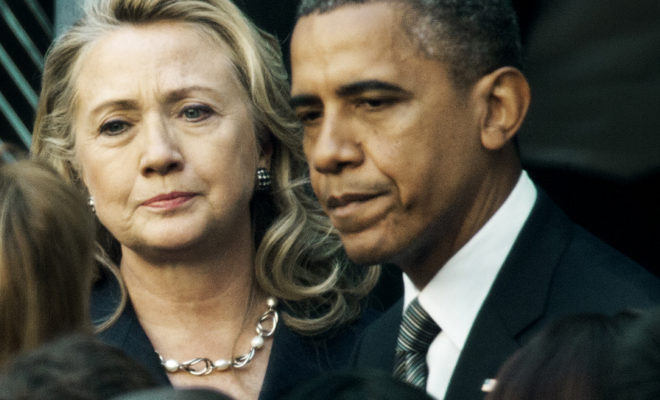 The Lid Just Blew Off Obama Admin’s Most Treasonous Scandal – Spy-Gate Can No Longer Be Covered Up.

Opinion | Most of the media is biased, left leaning fake news, this is why we have not heard a thing about the Obama administration’s disregard for our fourth Amendment protections.

It has been about two years since evidence of the Obama administration’s abuse of the FBI and NSA regulations have been known, yet there has been little to no coverage from the mainstream media.

In an interview on the show “Full Measure,” former Justice Department attorney Sidney Powell discussed the illegal  wiretapping on Donald Trump leading up to the 2016 presidential election.

Whether or not these actions happened are not in question. A FISA court Judge wrote a 99-page rebuke for the complete disregard for the law by third-party contractors.

The evidence is clear, so why hasn’t the mainstream media made an effort to report on the obvious abuse of our fourth Amendment protections?

The answer is, if it helps the liberal agenda, THEY DON’T CARE. The liberal media has an agenda and you can guarantee that you’ll only be fed anti-Trump, pro-democrat garbage instead of the truth.

Judge Collyer (The FISA Court Judge who wrote the rebuke) discovered that 85 percent of all database searches were unlawfully carried out by FBI contractors.  (page 82 of Collyer’s report)

The FBI had reportedly granted full, and apparently unrestricted access to three private contractors (Fusion GPS believed to be among them) allowing them to view American citizens’ private information – phone calls, text messages, emails – without oversight.

Because of the “two-hop” rule the FBI’s wiretapping warrant was able to reach Trump and his associates. Intel agencies can use one legal wiretap to access 25,00 people’s phones.

Aside from smearing Donald Trump and stopping him from becoming President, the information gained during the wiretapping of Trump and his associates likely gave the Clinton campaign a full picture of Trump’s campaign details before they ever became public.

If you switched the crimes around and it was Donald Trump who did all of this, it would be plastered all over the media and people would be in jail already. Instead, Obama and the Clintons remain unscathed.

← Previous Story MSNBC Panel Panics On Live TV, Say Ocasio-Cortez Is Going To Get Trump Re-Elected in 2020
Next Story → Ocasio-Cortez Flips Her **** After Media Says She “Doesn’t Understand” Amazon Deal