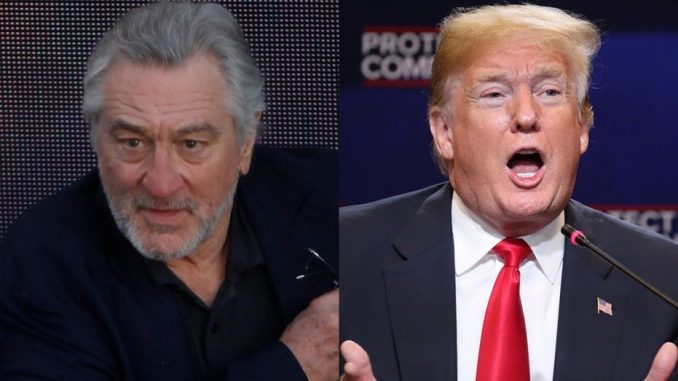 Opinion| ICYMI 5/18 THIS was classic Trump!- Like a fine wine .. this one only gets better with age

Following liberal actor Robert De Niro’s “ban” on President Trump from coming into and/or patronizing his Nobu Japanese restaurant chain, the White House issued a response. It wasn’t exactly the response De Niro was expecting, however.

White House Deputy Press Secretary Hogan Gidley spoke to Fox News and explained that De Niro along with his partner at the restaurant chain, Nobu Matsuhisa, have nothing to worry about. President Trump doesn’t plan on visiting the restaurant chain or the hotel that they own either.

Last week, Robert De Niro had stated to the Daily Mail that he would never be seen eating anywhere with President Trump, neither at his own restaurant or at anyone else’s.

“If he walked into a restaurant I was in – I’d walk out,” he claimed to the news outlet.

Robert De Niro, a frequent critic of President Trump who has been playing special counsel Robert Mueller on “Saturday Night Live,” talked Tuesday about how he’d like to bar the president from eating at his Nobu restaurant chain.

The Daily Mail reported that De Niro, a co-founder of the Nobu restaurant and hotel chain, insisted that he would not let Trump eat in his restaurants, and that he would leave any other eatery where the president entered.

“If he walked into a restaurant I was in, I’d walk out,” De Niro said.

Chef Nobu Matsuhisa, De Niro’s co-owner, then joked that it was his “dream for Trump to sit next to” De Niro so he could make them sushi.

During his 2013 trip to Russia to attend the Miss Universe pageant, Donald Trump did dine at the Moscow Nobu restaurant.

De Niro isn’t making himself look very good by bad mouthing the President of the United States. The actor should think twice about excluding someone with pockets as deep as Donald Trump’s from his businesses.

Take a look at the video below in which De Niro bashes Trump repeatedly: