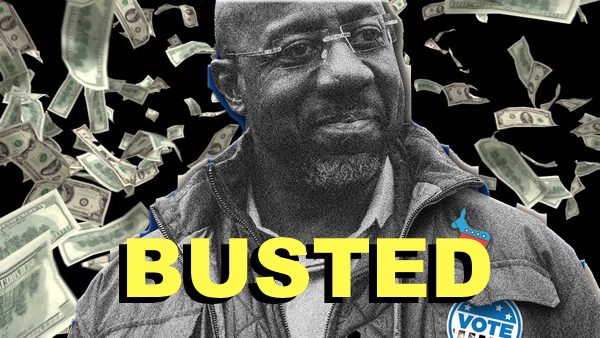 When it comes to politics, if something looks fishy…it probably is. And the best thing that you can do is follow the money and see where it leads.

During this election cycle, Democrat Senator Raphael Warnock received over $24 million from hundreds giving over 358,000 donations. But do you know what’s so strange about the whole thing? None of them have jobs!

That’s a lot of money and a lot of unemployed people! How did he manage to get so much money from so many people who don’t have jobs? Surely, they must be magic!

She had a very unusual name, which was one thing that made this particular “Florida Voter” stand out. They identified a woman with the same exact name who was making numerous donations using a Rhode Island address when they broadened their search. Mrs. Florida Campaign Finance Mule and Mrs. Rhode Island Campaign Finance Mule turned out to be the same woman, as you can probably imagine.

In the end, it turned out to be a real person. She had previously lived in Florida. She and her husband had, however, given up their Florida house and moved to Rhode Island. Nevertheless, despite no longer having any connections to or a residence in Florida, she and her husband were still listed as registered voters there. Everything was confirmed.

Her husband disclosed that his wife was not a significant or frequent donor to the Democratic Party.

The donor’s frequent contributions to Raphael Warnock and other Democrats have completely ceased since being questioned about it. Why would someone who has consistently donated time and money to progressive causes and politicians suddenly stop doing so?

So, what have we learned? There are some dark donors who donate a lot of money to certain candidates who seemingly are unemployed and located in different states than Raphael Warnock.