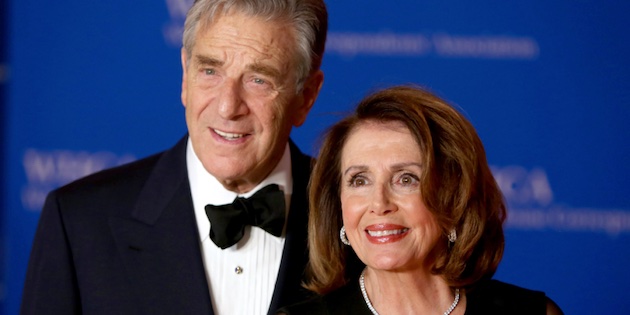 Paul Pelosi is the luckiest man on earth. He continues to make millions on stocks by gambling on what legislation is passed by congress. You may recall that a few years back he bought into a VISA IPO even though there appeared to be a reason to believe that the House would pass legislation that would hurt the value of the stock. But, miraculously the bill failed.

The bill eventually did pass, but lucky Mr. Pelosi had just sold his stock before that happened. What an incredible turn of luck. Recently, the fortunate Mr. Pelosi purchased stock options in a company called Nvidia, a leading manufacturer of computer chips. His investment is between one and five million dollars. It was a risky move, but when you are as lucky as Mr. Pelosi, what the heck, take a chance.

Pelosi’s luck was the deciding factor and his purchase comes just before congress brought forth a bill that will give chip manufacturers billions in subsidies from the federal government and in addition to that, there will be tax breaks that will mean even more money to the chip manufacturers. To the best of my knowledge,m the only other man this lucky in the United States is Richard Blum. He is also known as Mr, Dianne Feinstein and quite coincidentally the husband of a powerful woman in Congress.

These two men must carry around pocketfuls of rabbit feet and horseshoes. Can you think of any other reason these men could be so lucky? I know I can’t.

House Speaker Nancy Pelosi’s husband purchased up to $5 million in stock options on a computer-chip company ahead of a vote on legislation next week that would deliver billions of dollars in subsidies to boost the chip-manufacturing industry, new financial disclosures show.

Paul Pelosi purchased on June 17, 20,000 shares of Nvidia, a top semiconductor company, worth between $1 million and $5 million, the Daily Caller reported, citing disclosure reports filed by the House speaker.

Voting in the Senate on a bill to boost the U.S. semiconductor industry and improve competitiveness with China could begin as early as Tuesday, Senate Majority Leader Chuck Schumer has been telling lawmakers, a source familiar with the issue said on Thursday.

The source said the bill would include, at a minimum, billions of dollars in subsidies for the semiconductor industry and an investment tax credit to boost U.S. manufacturing.

One more bit of luck for Mr. Pelosi is that the Speaker of the House is against forbidding members of Congress from playing the stock market. Or their spouses.