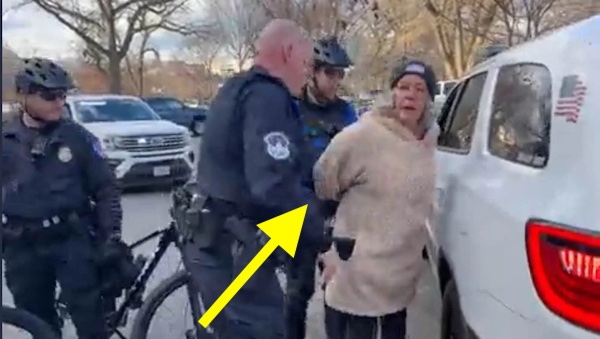 What the hell is this country coming to?!

First they murder this poor woman’s daughter, then, when she protests on the anniversary of her poor daughter’s death … she gets arrested.

Eat your heart out Putin …

The mother of Ashli Babbitt, Micki Witthoeft, was arrested by U.S. Capitol Police at a protest Friday afternoon in Washington, D.C. marking the second anniversary of her daughter’s killing by Capitol Police officer Michael Byrd during the January 6th riot. (Update at end.) Micki Witthoeft was part of a group of protesters walking westbound on Independence Avenue between the Capitol and House office buildings. A trailing police officer in a marked car tried to order the protesters to move to the sidewalk away from the Capitol. The protesters ignored the warning and continued marching, with Witthoeft on the outside in the middle of a traffic lane.

Capitol Police set up a roadblock and ordered the protesters to cross the street to the sidewalk or be arrested. After an officer shoulder checked Witthoeft where she tried to move past him, Witthoeft turned her back to the officers and offered to be arrested. She was immediately cuffed and taken into custody.

🚨 BREAKING ‼️
They arrested Ashli Babbitt’s mom, Micki, for jaywalking!
I guess she’s lucky they didn’t murder her like they did her daughter.https://t.co/9e4LpovO5i https://t.co/4tbIsEMLiN pic.twitter.com/SrU7Y6znma

Ashli Babbit‘s mom getting arrested at the Capitol on the second anniversary of the #J6 riot Is all the schadenfreude I needed today😂#FAFO #InsurrectionistLoser #Yoinked #ByeMicki pic.twitter.com/jAN4m6slFF

D.C. law says spontaneous street protests are allowed, but that police must give three verbal warnings that can be clearly heard and understood before arrests can be made. It is not clear of the Capitol Police followed the prescribed procedure.

The march from a rally in front of the Supreme Court down First Street to the arrest on Independence Avenue can be seen at about the three hour mark on the video below. The protesters did not try to block the entire street, staying in the curb lane.

Around 1:45 p.m., the woman was arrested for two Capitol Traffic Regulations – §16.3.20 Obey An Order, as well as §16.3.40 Blocking And Obstructing Roadways. The person was identified as 58 year old Micki Witthoeft.

As is typical for this charge, Ms. Witthoeft was processed and released this afternoon after being given a citation to appear in court at a later date.