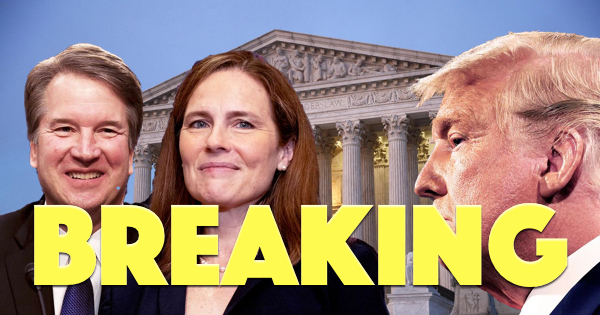 For those of us who thought that nothing would ever happen that would be of any consequence when it came to investigating the 2020 election and it’s … ‘irregularities’, check this out!

While I am super skeptical that the Supreme Court would ever do anything to rock the boat, after the over turning of Roe v Wade, it would be hard to say that there is not at least a chance.

Check out this bombshell news from the one and only GWP …

While there has been much public attention on the U.S. Supreme Court’s present consideration of the “independent state legislature” theory in Moore v. Harper involving North Carolina’s redistricting, that case would not immediately upend the 2020 Presidential Election. In contrast, a little-known case that appeared recently on the Court docket could do just that. The case of Brunson v. Adams, not even reported in the mainstream media, was filed pro se by ordinary American citizens – four brothers from Utah — seeking the removal of President Biden and Vice President Harris, along with 291 U.S. Representatives and 94 U.S. Senators who voted to certify the Electors to the Electoral College on January 6, 2021 without first investigating serious allegations of election fraud in half a dozen states and foreign election interference and breach of national security in the 2020 Presidential Election. The outcome of such relief would presumably be to restore Donald Trump to the presidency.

The important national security interests implicated in this case allowed the Brunsons to bypass an appeal that was frozen at the U.S. Court of Appeals for the 10th Circuit and get the case to the Supreme Court which has now scheduled a hearing for January 6, 2023. The Brunson Petition for a Writ of Certiorari would require the votes of only four Justices to move the case forward.

It seems astounding that the Court would wade into such waters two years to the day after the Congressional vote to install Joe Biden as President. But these are not normal times. Democrats may well push legislation in this month’s lame duck session of Congress to impose term limits and a mandatory retirement age for Justices, and thereby open the door to packing the Court. Such a course would seem to be clear violations of Article III, Section 1 of the Constitution which provides that Justices “shall hold their Offices during good Behavior.” In addition to such institutional threats to the Supreme Court, several Justices and their families have been living under constant threats to their personal security since the overturning of Roe v. Wade.

Perhaps these institutional and security threats have provided powerful incentives for the Court to put Brunson v. Adams on its dockets as a shield to deter any efforts by the lame duck Congress to infringe on the Court’s independence. Or perhaps conservatives on the Court are serious about using the Brunson case as a sword to remove public officials who they believe have violated their constitutional Oaths of office by rubber-stamping Electors on Jan. 6th without first conducting any investigation of serious allegations of election fraud and foreign election interference.

Moreover, recent weeks have brought a cascade of news suggesting the likelihood of an impending constitutional crisis that could be difficult to resolve without the Court’s intervention. It is now clear that the Federal Bureau of Investigation (FBI) was colluding with social media giants Twitter and Facebook to censor news of Hunter Biden’s laptop in the weeks leading up to the 2020 election – a most egregious First Amendment violation intended to rig the election outcome and perhaps to install an unaccountable and criminal puppet government. Meanwhile, the January 6th committee may soon send a criminal referral to the Justice Department to arrest President Trump even though his reinstated tweets are a reminder that he was not calling for insurrection but for peaceful protest on January 6th. More recently, the Department of Homeland Security’s Cybersecurity and Infrastructure Security Agency (CISA) was reportedly working with Big Tech to censor election critics.

Supreme Court Justices may well see these approaching storm clouds and conclude that the Court’s intervention is necessary to prevent larger civil unrest resulting from constitutional violations that are undermining public trust and confidence in the outcomes of both the 2020 and 2022 elections. When criminals break the law — state and federal statutes — to rig an election, we are dependent on prosecutions by law enforcement agencies that have sadly become politicized and complicit. When they break the Constitution – the supreme law of the land, the final recourse may be the Supreme Court.

As the Brunson lawsuit argues, all of Congress was put on notice prior to its January 6th vote by more than a hundred of its own members detailing serious allegations of election frauds and calling for creation of an electoral commission to investigate the allegations.

Moreover, the Office of Director of National Intelligence (ODNI) was required to submit a report on foreign threats to the 2020 Presidential election by December 18, 2020. That deadline was set by executive order and by Congress itself. When December 18th came and went without ODNI submitting its report, Congress should have started asking questions and investigating. In fact, DNI John Ratcliffe announced on that day that the 17 U.S. intelligence agencies he was overseeing had found evidence of foreign election interference but were split as to its significance and whether such breach of national security was sufficient to overturn the outcome of the election. And yet there was no action whatsoever by Congress, no inquiry and no investigation. Instead, Congress approved the possibly fraudulent election results on January 6th without asking any questions of the DNI and the Intelligence Community.

When the results of the 1876 presidential election were in doubt, Congress created a special Electoral Commission made up of five House members, five Senators, and five Supreme Court Justices to investigate. In contrast, in early 2021 Congress had nearly two weeks to investigate before the January 20th date of the Presidential Inauguration. Had Congress waited even just one more day, they would have received the long-awaited ODNI report reflecting a split in the Intelligence Community and the DNI’s own conclusion that the People’s Republic of China had interfered to influence the outcome of the presidential election. As Dr. Barry A. Zulauf, the Analytic Ombudsman for the Intelligence Community, concluded at the time, the Intelligence Community shamefully delayed their findings until after the January 6th Electoral College certification by Congress because of their political disagreements with the Trump administration. This paints a picture of collusion and conspiracy involving members of Congress and U.S. intelligence agencies to coverup evidence of foreign election interference and constituting the crime of High Treason.

The Brunson lawsuit does not claim the election was stolen, merely that a large majority of Congress, by failing to investigate such serious allegations of election rigging and breaches of national security, violated their Oaths to protect and defend the Constitution against all enemies, foreign and domestic – an Oath also taken by Supreme Court Justices and members of the U.S. military.The fact that the Brunson case has made it to the Court’s docket suggests profound concerns about a lawless January 6th Congressional committee, politicized federal law enforcement and intelligence agencies, and major constitutional violations intended to overthrow an elected government by manipulating the outcome of the presidential election.