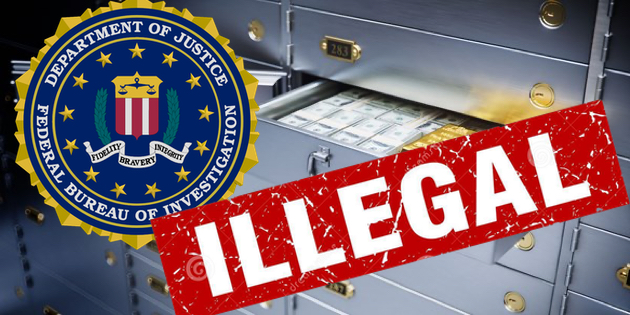 UAFReport| Daniel| How much do you trust others with your money and valuables? Probably not much if we’re talking about banks.

Most of us keep our money in the bank expecting it to be secure and safe. But sadly, bad things do happen sometimes, and people lose their money.

Let me ask you another question…do you have a safe-deposit box with a bank? You expect your belongings to be safe there, don’t you? You know, I was thinking the same thing, until I started doing some research on them. The truth of the matter is that they may not be as safe as you would hope them to be.

Does your area flood? If so, and the water gets too high, your box isn’t waterproof. What if the bank burned down? Could your belongings be burned with it? It’s possible. What is someone robs the bank and steals what’s in your box? While it’s rare, it still happens about a dozen times per year, believe it or not.

But what if your own government decides to break into them “lawfully” and search your box? Well, it happened recently in Beverly Hills, California as approximately 1,400 safe-deposit boxes were drilled and opened with the contents stolen.

According to the LA Times,

The privacy invasion was vast when FBI agents drilled and pried their way into 1,400 safe-deposit boxes at the U.S. Private Vaults store in Beverly Hills.

Eighteen months later, newly unsealed court documents show that the FBI and U.S. attorney’s office in Los Angeles got their warrant for that raid by misleading the judge who approved it.

They omitted from their warrant request a central part of the FBI’s plan: Permanent confiscation of everything inside every box containing at least $5,000 in cash or goods, a senior FBI agent recently testified.

The FBI’s justification for the dragnet forfeiture was its presumption that hundreds of unknown box holders were all storing assets somehow tied to unknown crimes, court records show.

It took five days for scores of agents to fill their evidence bags with the bounty: More than $86 million in cash and a bonanza of gold, silver, rare coins, gem-studded jewelry and enough Rolex and Cartier watches to stock a boutique.

The failure to disclose the confiscation plan in the warrant request was brought to light in FBI documents and depositions of agents in a class-action lawsuit brought by box holders who claim the raid violated their rights because they were not given adequate warning.

The documents filed with the court also suggest that federal investigators violated the limitations that United States Magistrate Judge Steve Kim set in the warrant by inspecting the personal items of box holders for proof of criminal activity.