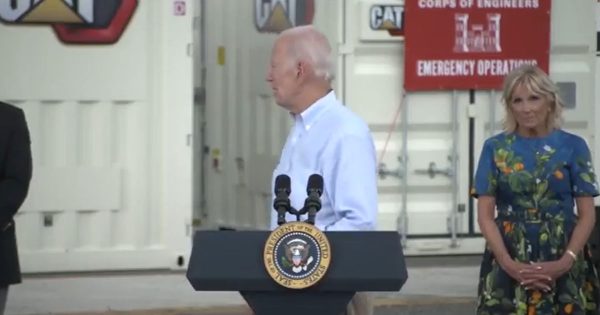 President Joe Biden had difficulty speaking and correctly pronouncing words during a speech in Puerto Rico on Monday, turning and asking someone else on stage to “help me with the pronunciation.”

“And we’ve announced sic – a hundred and sixty-three million, uh [unintelligble] million dollars to begin construction on the canal to restore can -” Biden stammered before turning to his right to beg Puerto Rico governor Pedro Pierluisi for help.

“Help me with the pronunciation,” Biden demanded, to which Pierluisis replied, “Martin Pena, Martin Pena.”

Biden experienced several other strange moments during his Puerto Rico trip, such as when he appeared to stop and stare at the ground as if searching for some lost object following the speech.

While hosting a reception for Hispanic Heritage Month earlier this month, Bidentold members of the audience that “maybe some of you” came to the United States illegally, then declared “y’all were here before we were” in a seemingly contradictory statement.

“Can you imagine? Maybe some of you were dreamers,” Biden said. “It’s like your – why don’t what, people expect to say when your mom’s taking you across the Rio Grande to say, ‘No mama, I’m stayin’ here, I’m not goin. I’m gonna make my choice.’ C’mon.”

Later in the speech, Biden switched and gears and told the audience that instead of immigrating illegally, they have been in the US longer than “we were.”

Biden’s speech comes as his poll numbers among Hispanics have sunk to record levels, and increasing numbers of Hispanics have indicated that they plan to support Republican candidates in upcoming elections.