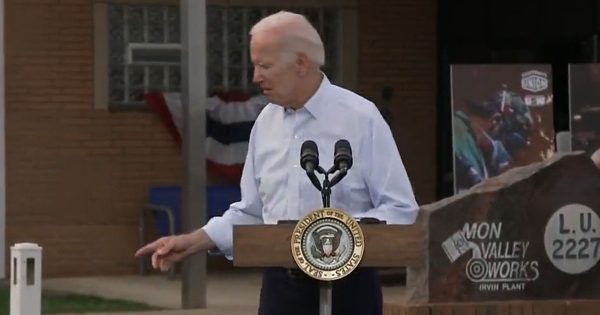 Syndicated with permission via Valiant News| Gabriel Keane|  President Joe Biden was visibly confused and needed verbal assistance leaving the stage following a Labor Day speech this week, asking his staff “Where am I going?”

“Thank you,” Biden said upon conclusion of the speech, before turning to his staff and pointing offstage.

BIDEN: "Where am I going?" pic.twitter.com/mrbaYYUQG8

During Biden’s multiple speeches throughout the day, he railed against supporters of former President Donald Trump.

“One of the things that is clear to me is that this new group headed by a former president, a former defeated president, we found ourselves in a situation where we’re either gonna look forward or look backwards,” Biden said. “And it’s clear which way [Trump] wants to look. It’s clear which way the new MAGA Republicans are. They’re extreme.”

Biden took to social media on Sunday to declare MAGA “extremism” from those who still doubt the results of the 2020 election to be a “threat” to the “soul” of America.

The official @POTUS Twitter account wrote that “The MAGA agenda represents an extremism that threatens the very foundations of our Republic,” and claimed that conservatives do not “respect our Constitution” or “recognize the will of the people.”

The @POTUS account added, “America respects free and fair elections. We honor the will of the people. We do not deny it.”