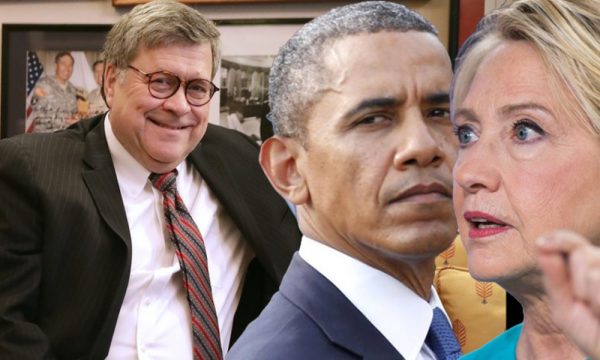 The world is full of unproven myths. There’s supposedly a huge, serpent-like creature that lives in a place called Loch Ness. People have dedicated their lives to proving that this big, hairy, human-like beast exists.

Whether you believe in the Loch Ness Monster or Big Foot depends on how much credence you place on the degree of evidence that supports either. But when it comes to the U.S. government, there’s something many will argue is a myth as well.

It’s called “the deep state.” If someone were to produce video evidence of themselves swimming with the Loch Ness Monster or walking hand-in-hand with Big Foot, the myth would become impossible to dispute.

His second term as AG was under President Donald Trump. His knowledge of the workings of Washington, D.C., spans decades. In between terms as attorney general, Barr ran the Central Intelligence Agency (CIA).

When it comes to an intelligent perspective on “the deep state,” few can rival Barr. Barr did a recent interview on PBS’ “Firing Line.” The two-time former attorney general sat down with host Margaret Hoover. Barr was first asked to discuss his time in the Bush administration.

He immediately noted that President Bush had led the CIA as well. Barr said, “He (President Bush) was CIA director for one year and that institution is now named after him. When you drive by it in Langley, it’s the George H.W. Bush Center.”

Barr went on to say, “And he was highly regarded because he basically trusted people in the agency. He didn’t separate himself from them and, you know, bash them and so forth. Now, I have to say that it was a different age.

“Things have, you know, evolved.” Frequently, William Barr uses the term “evolved” to indicate things have changed and not for the best. The former attorney general then bluntly said, “There is a deep state.”

He made no bones about it. Barr didn’t preface his words with some kind of perspective. Barr explained his position using a concrete explanation. “I am critical of the Deep State and believe it exists,” he continued.

“The way I would define the deep state is an increased willingness by more and more government civil servants to pursue political objectives rather than stand up for the values of the institution they’re a part of.”

Despite a critical need to be bipartisan, Barr says these deep state beasts are far from politically neutral. He believes it is responsible for “perverting government.” He thinks the “vast majority of civil servants try to do an honest job.” It’s the upper-level crust that’s corrupted.

Rightfully, you may have issues believing in a massive sea creature or a big hairy, human-like beast with an artful adeptness at avoiding detection. But if you’ve questioned the existence of a “deep state,” you might want to revisit that belief.

The deep state truly does exist. A man who’s swum in the swamp and walked with the beasts themselves confirms its existence. But the deep state government machine has one other ominous characteristic. It may be the biggest, most dangerous monster of them all.